Psychilis monensis, an orange yellow form of this variable species, photographed "in situ" very deep into the interior of Mona Island. 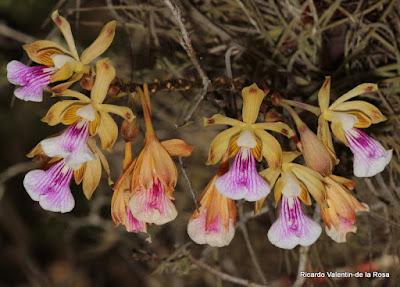 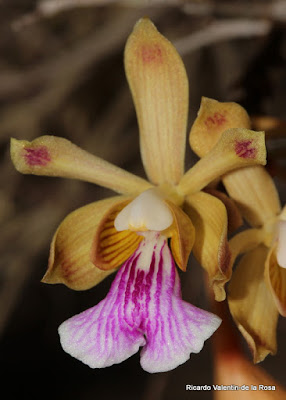 This orchid is locally common, and sometimes downright abundant in certain parts of Mona Island.  This species produces flowers that can vary in color and markings between different plants.   This particular plant has orange yellow floral segments framing a richly colored lip.
Posted by Ricardo at 10:05 PM No comments: 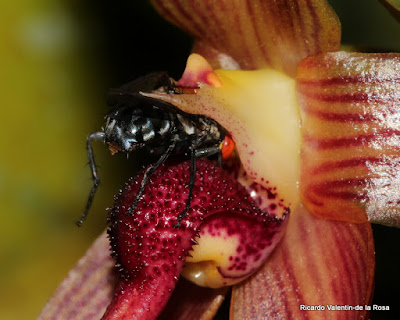 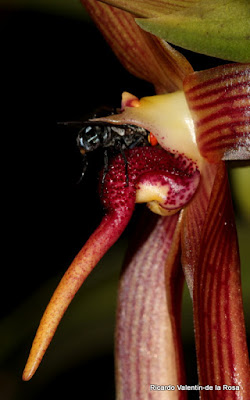 The flower of this Bulbophyllum proved irresistible to a local fly.  The hinged lip pressed the fly into the stigmatic cavity.  The fly got stuck in place due to the stigmatic fluid.  The fly was struggling and trying to escape but without success.  Very gently I released it, the fly fled with admirable alacrity.  So far no other insect has become trapped in the flowers.  I suspect the flower is producing a fragrance with a distinct fecal tone for the flies to be so interested in the them, but so far I haven't been able to detect any fragrance at all.
Posted by Ricardo at 9:59 PM No comments: 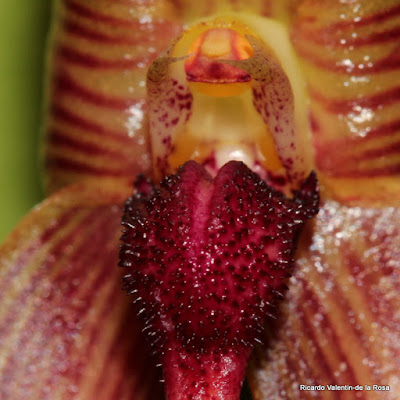 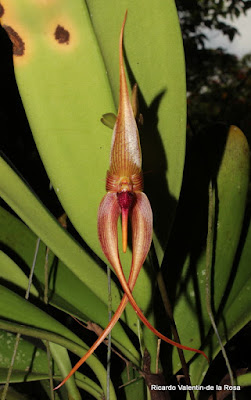 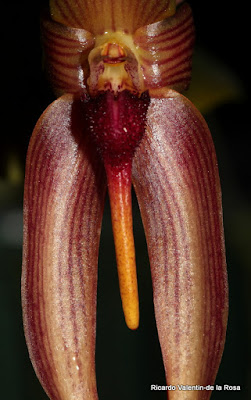 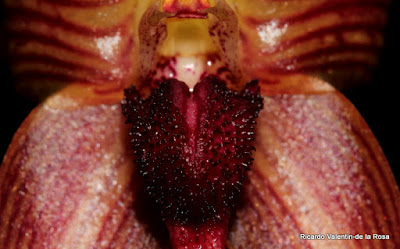 I brought this plant about three years ago as a three bulb division.    Initially, the plant didn’t had much by the way of roots so growth was slow.   After the first new growth produced roots the plant grew better, with larger growths.   However it didn’t bloom until the plant had accumulated several large and plump pseudobulbs.

The inflorescences are wiry and I didn’t notice them at first.   The inflorescences in my plant open their flowers sequentially, having just one flower open at a time.  The flowers are large and striking, you can easily see the echinolabium parent influence in them.

This plant is cultivated in a relatively small pot, about five inches wide, in bark with some Styrofoam peanuts in the bottom of the pot to aid drainage.  The plant gets watered twice a week when it is in full growth and it has not rained in the previous few days.  When it is not in its growth phase it can go one or two weeks without watering with no sign of distress.  But when it is producing pseudobulbs I don’t allow it to go bone dry.

The plant get full sun for about two hours early in the morning and then sunlight filtered through the canopy of tall trees.    During part of the year the sun comes up in a gap between two large trees this means that the plants get more hours of direct sunlight early in the morning.  They have shown no ill effects due to the increased light exposure.


I have not been able to detect any fragrance from the flowers.  However the flowers are attracting the local flies, so it is probably producing at least some fragrance, probably with a distinct fecal smell.   I found one fly stuck to the fluid in the stigmatic cavity.  I released it and it fled with alacrity.  Other flies were seen in the vicinity but so far only one has become trapped.
Posted by Ricardo at 9:21 PM No comments: