I brought this curious plant as a result of falling for a piece of false advertisement back in the early 1990’s. This plant was advertised as being a yellow anosmum, as a collector of anosmum variations I thought this would be a particularly nice addition to my collection. When it arrived it was labeled Dendrobium anosmum var. delacourii. I did some searches for this name, book and library searches in those ancient pre-google times. But I could find no reference for this name, even today with all the might of the Internet at my hands I have yet to find any reference to delacourii in any book as an anosmum variant. There are a few photos of this Dendrobium in the Internet, they all have the characteristic rolled up tubular lip but unfortunately there is no bibliographical reference to go with the name in the texts of the photos. The closest that I have found to a description of something similar to this plant is in H. P. Woods book The Dendrobium where a var. velutinum is described. However the flower in the photo that is used as reference to the description of velutinum does not resemble the plant I brought as delacourii. But given the hairy lip of this plant velutinum seems like an apt description.
The flowers of this variety are among the most distinctive of all the anosmum types. My flowers have relatively slimmer sepals and petals than other varieties and the tubular lip is in some flowers almost parallel to the flower segments. The fragrance is the same as that of the other anosmum varieties but since my plant usually produces few flowers it is not as powerful. The vegetative body of my plants is much less robust than that of the other varieties, the stems are very slim. This plant keikis easily and the plantlets are easy to grow away from the mother plant once they have two year’s growth. The salient characteristic of this plant is the lip covered with a multitude of short hairs on both its upper and lower surfaces. For me the main virtue of this plant is that in my local climatic conditions it blooms in May, months after all other varieties have finished blooming. 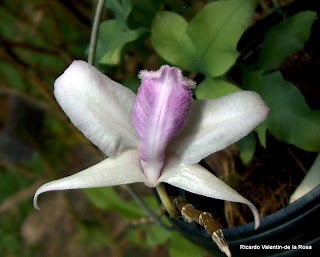