These photos were taken seven days after Hurricane Hugo hit the northwest corner of the Island of Puerto Rico.  I was able to take them because Hector Colon invited me and Sandra Moya to see the damage inflicted by the hurricane to the forest of the area around El Yunque mountain, then know as the Caribbean National Forest.  We were shocked by the tremendous damage that the high wind inflicted to the forest.  In some parts it looked like someone had bombed the forest.  Bird mortality was high, as I recall half of all the Puerto Rican parrots in the forest perished as a result of the hurricane.  Other species were similarly affected. We traveled around the El Verde area.  We narrowly avoided being in the middle of a shoot out between cars that left several cars riddled with bullets by the side of the Espiritu Santo river bridge.  We were unnerved because we heard the shooting from the spot we were inside the forest a few hundred feet away from the bridge.  Although in some parts of the forest the damage was severe, in some sheltered parts the forest suffered much less damage.  But huge parts of the forest were defoliated in a way that I had never thought possible.  I took these photos and forgot about them for decades.  Due to poor storage they degraded considerably and some became damaged.  But even in their decay they give a powerful testimony of the awesome and frightful power of a tropical cyclone.
Posted by Ricardo at 10:06 PM No comments:

I visited Cueva del Lirio many times during the 1980's.  My only regret is that I didn't take more photos of the inside of the caves.  Mona Island caves are laberinthic and this makes them unsettling and disorienting for those that are not accostumed to visit caves.  There are many strange and wonderful speleothems inside this cave.  Hopefully one day I will be able to go back to take photos of them.
Posted by Ricardo at 8:11 PM 4 comments:

Tolumnia (Oncidium) variegata, birds weaving this orchid into their nest 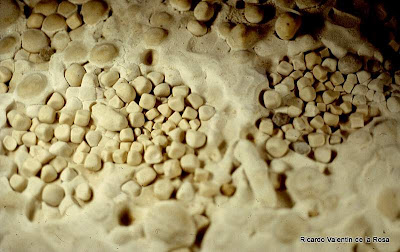 These are cave pearls from a cave in the Island of Mona, a small island about fifty miles to the west of the Island of Puerto Rico.  Mona Island is composed of a huge slab of limestone that rose from the sea about a million years ago.  There are two types of limestone in Mona Island, caliza lirio, the top layer, is relatively easily dissolved by rain water, the bottom layer is dolomite which is harder and resists dissolucion by rain much better.  In the boundary between the two layers of limestone you get enormous caves which can have hundred of thousands of square meters of interior space.  The easiest caves to access are all around the coast of the island. Almost all were severely altered by man early last century to extract huge quantities of guano that were deposited in the caves in the past.  The caves in Mona Island are laberinthic with many side passages and cavities going in all directions and interconnecting in all sort of ways.  They are full of a large variety of stalagmites and other speleothems, some of which seem to defy gravity.  Cave pealrs can be found in large numbers in some of the caves but they are rarely as white and pristine as these ones.  As you can see they are not necessarily round, they can be square, triangular and irregularly polyhedral.  From the empty niches you can tell that some have been taken away from the cave.  These pearls have no commercial value and are best enjoyed in their natural setting.  Hopefully these ones are still in the cave where I saw them.
Posted by Ricardo at 10:18 PM No comments:

The goats on Mona Island back in 1979, ABE field trip

Grammatophyllum stapeliiflorum, flowers that look like the result of a night of drunken carousing between an orchid an a bat 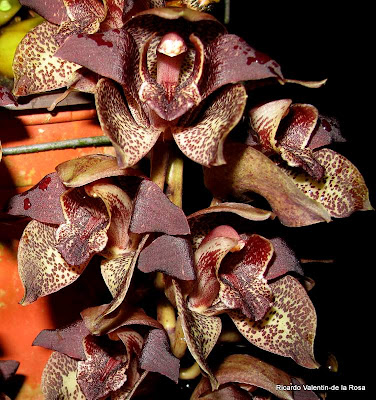 
This Dendrobium is a hybrid of the species loddigesii and cucullatum.   In my experience Dendrobium loddigesii will grow well under warm conditions but will bloom poorly or not at all.   Dendrobium cucullatum will grow and bloom well under my conditions.  This hybrid has been a disappointment for me, it grows relatively well but blooms with few flowers.  This plant is capable of producing a good display of pink flowers.  I have seen a plant grown by Ed Merkle that produces a breathtakingly beautiful display of pink flowers.
My suspicion is that my conditions are just too warm for this plant to perform at its best.  I cared for this plant in ways that elicit abundant flowering from its pendent Dendrobium relatives with little to show for the effort.   Surprisingly the flowers of my two plants are very different.  One has big flowers with wide petals and sepals and a wonderful heart shaped lip.  The other one has narrow petals and sepals and a strange trumpet shaped lip.  Why these two plants of the same hybrid are so different is a mystery to me as primary hybrids tend to be quite similar, perhaps different forms of the species were used to make the two of them.  Since they bloom weakly I keep them mainly as curiosities.  Perhaps growers that can supply the proper seasonally cooler temperatures will probably be able to enjoy really good blooming from this orchid.
Posted by Ricardo at 10:00 PM No comments:

Dendrobium parishii a small orchid from the deciduous forest of Asia

Posted by Ricardo at 9:48 PM No comments:

Dendrobium farmeri, a flower with a touch of lavender in the petals

Posted by Ricardo at 8:25 PM No comments: