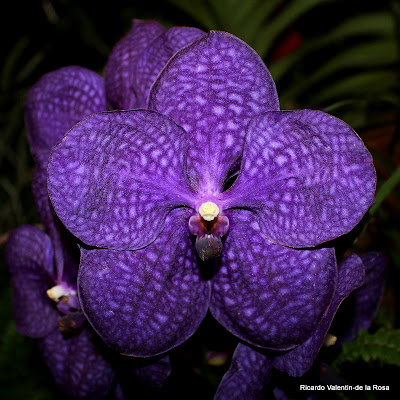 This large flowered Vanda hybrid was part of Edwin Alberto Perez award winning exhibit at the Mayaguez orchid society orchid September 2012 show.  The exhibit won the AOS trophy for the best exhibit of the show.  This plant was on one side of the exhibit in a place that was slightly under a shadow.  This made the flowers look even darker than their real color.  A truly extraordinnary Vanda, and well cultivated too, an FCC plant doesn't necessarily produce FCC quality flowers if it is cared for in an indifferent manner.
Posted by Ricardo at 9:56 PM No comments: 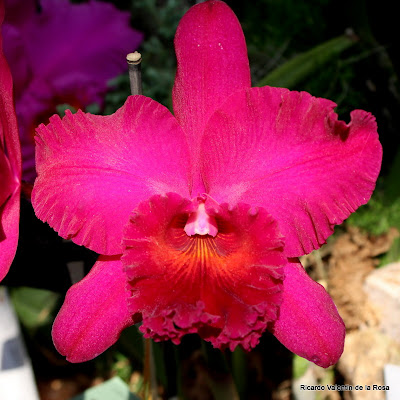 Photographed at the 2012 Mayaguez orchid society Orchid Show, at the Mayaguez Mall.  I used sunlight streaming through a skylight to photograph this orchid to really bring out the bright color of this flower.
Posted by Ricardo at 6:33 PM No comments:

This Cattleya hybrid was seen at the 2012 Mayaguez Orchid Show at the Mayaguez Mall.  The flower was quite impressive in color and size and presentation.  However it was sadly marred by a bit of damage to the lip.  Since the damage was confined to a very fine line on the lip, I erased it with the help of a bit of computer magic.
Posted by Ricardo at 6:18 PM No comments: