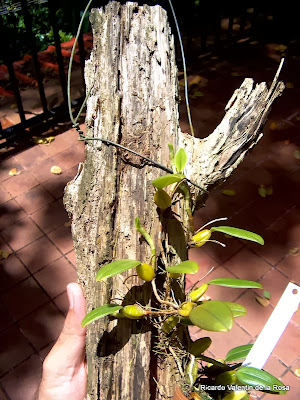 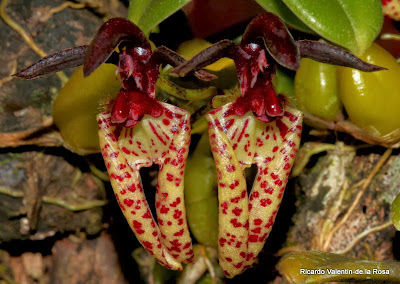 I have had this plant of the red form of Bulbophyllum lasiochilum (also known as Bulb. breviscaphum) for about ten years.  When I received it, the plant was composed of a just three pseudobulbs in a tiny clay pot filled with sphagnum moss.  Since I had a number of Bulbophyllum growing in a variety of pots and mounts, I decided to experiment with this one.

I mounted the orchid on a piece of a branch of teak.  Teak wood is known for its strong resistance to decay and its great density and weight.  The teak branch I used had been cut the previous year to be used in a parrot cage.   The parrot meticulously removed every bit of the outer bark but the branch itself remained untouched.    I tied the clay pot to the branch with a metal wire and positioned it in such a way that when the pseudobulb produced its new growths, they would easily reach the mount.  Given the length of the internodes of this species, the plant started colonizing the branch with its very first growths.

By the end of 2005, as you can see in the first photo, the plant already had several pseudobulbs attached to the branch.  Note that the pseudobulbs are attaching to the bare branch.  Eventually the clay pot was removed, I gave it to a friend since it still had living pseudobulbs in it and they were still producing new growths.

In the photo taken in 2013 you can see that the pseudobulbs have migrated all the way to the top pf the plant.  The lower pseudobulbs were alive for many years but eventually died.  Only the pseudobulbs in the top third of the branch are alive.  The orchid roots rambled all over the branch.   Even though teak wood is very hard, years of rain and fertilizing has taken their toll and parts of the branch have decayed.  However it has to be noted that it has survived mostly intact for an impressively long time in an environment where most wood decays or is turned into mush by insects in a few years.

What is my verdict about using a teak branch as a substrate?  It is clear the plant grew well, but it didn’t grow as well as other Bulb. lasiochilum that were attached to tree fern plaques.    Plants on tree fern grew larger and produced more pseudobulbs.  My impression is that the teak branch, because it retained little by the way of moisture and fertilizer, offered few resources that the plant could use to grow.

Media:  A piece of a branch of teak wood.

Potting:   In the future as the plant overgrows the branch, pieces will be removed and mounted in fern post and small plastic pots with sphagnum moss.

Fertilizing:  A high nitrogen fertilizer is used when the plant is growing.  None is given outside the growing season.


Watering:  The local rain is enough to cover this plant needs outside the rainy season.  In the dry season, a whole month can pass with no measurable rain, during this time the plant is thoroughly drenched once a week.