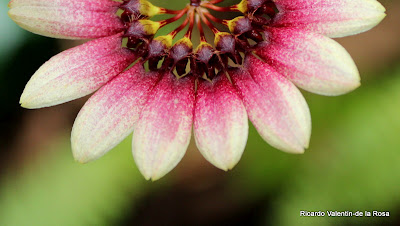 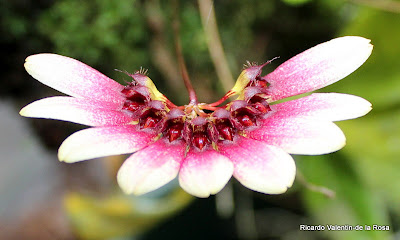 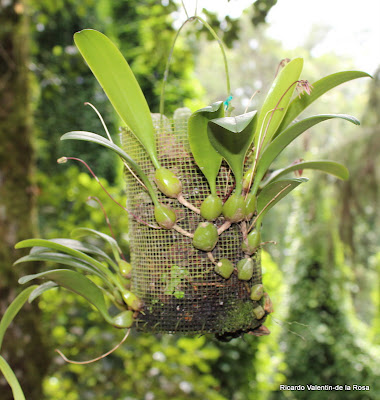 This is the hardiest of all my Bulbophyllum.  I have had it for many years and it has survived both overwatering and utter neglect.   It helps that the local climatic conditions in the mountains where I live are favorable for its growth, but it also has survived well in the coast where it is much hotter and drier.   This plant blooms from me between October and December. It produces flowers arranged in a half daisy pattern.  The inflorescence is wiry and it is easy to miss until it starts developing the flowers.  A single pseudobulb can produce several inflorescences if it is healthy and large.  This is one well behaved plant which will produce growths that closely follow the contours of its post.  I don’t culture this one on pots because it keeps outgrowing them in a relatively short time.  I had two plants, one in a fern post and another growing in the outside of a wire basked shaped like a cylinder.  Both have done very well, unfortunately the fern post eventually rotted away and the plants had to be transplanted elsewhere.  The plants were in the fern post for eight years and covered it completely.  The wire basket is full of bark, however as the bark decays it gets washed away during watering.  To replace the decayed bark I add fresh pieces through the top opening of the basket.  This sometimes attracts small flies and it is quite amusing to see them wall around on top of the flower and occasionally trip on the lip.  I have seen flies with pollinia of this species on the back and from time to time a seed capsule starts to develop.
Media:  It seems indifferent to the type of media as long as it gets watered and fertilized according to its needs.  I have had it in tree fern and bark.

Potting:  I cultivate them in a fern post and in a wire basket.  I initially had it in small pots proportionate to the size of the plant but it kept outgrowing them in a relatively short time.   Fern post eventually decay, but they can accommodate the growth of the plants for many more years than a pot.
Watering:   During the summer this plant gets rain every single day in the afternoon, the media stays constantly wet for months.  During the dry season, if it is not growing it gets a soaking once a week or a bit more frequently if the bulbs start to become furrowed.  Although this species, likes many other Bulbophyllum, likes frequent watering, this plant has shown itself to be hardier than the others in regard to tolerance to less than ideal watering schedules and has survived neglect in the coastal lowlands.  However the effect of neglect is that you get small pseudobulbs that bloom rarely if at all.
Humidity: The local weather provides the right amount of humidity for this plant most of the year.  Humidity locally fluctuates between 70% and 90% during the day.  At the height of the dry season humidity might go down to 50% for a few hours a day but climbs over 70% at night.  At the height of the wet season it can stay close to 100% during the night.  During its growing season the higher the environmental humidity the better, after it finishes its growing phase it can tolerate less humid conditions with no ill effects such as leaf loss.

Fertilizing: A fertilizer with high nitrogen content is used two times a week when this plant is producing new growths.  I stop fertilizing when the new growths achieve mature size.  I don’t’ fertilize if the plant is not producing either new growths or roots.

Light: It gets bright light, it is with my Cattleya, it gets full sun early in the morning and the rest of the day it is under the shade of trees.  It is not in deep shade.  This plant blooms better with high light but can still bloom quite satisfactorily with the level of light given Phalaenopsis.

Temperature: From 95 F high day to 75 F at night during the summer, 80F to 60F during the night in winter.
Care: Under my conditions, this plant thrives with routine care.
Pests:  So far no insect pests have bothered this plant.  But this plant has lost leaves and pseudobulbs from rot during the rainy season when they became accidentally damaged.

Hi, Ricardo. I´ve just bought one B. Lepidum and live in Argentina. I don´t have those levels of humidity at all, which can go from 40% to 80% in summer and 0% to 60% in fall to spring. I´m in trouble. Shall i have to build a little greenhouse for it? Thanks in advance.