Dendrobium Adastra a hybrid of anosmum and cucullatum 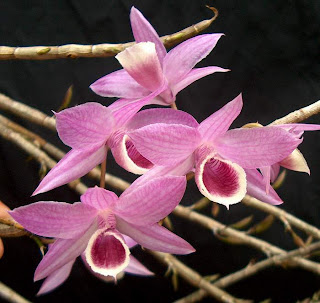 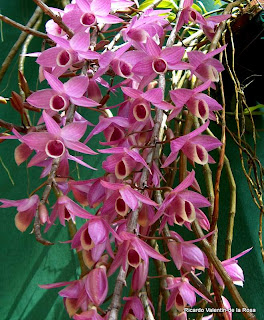 I brought this plant many years ago in a Puerto Rico Orchid Society show at el Coliseito Pedrin Zorrilla.  When I brought the plant it didn’t have an ID but given its distinct flowers it was easy to identify it using the sources available over the Internet.  This orchid is a hybrid of Dendrobium anosmum and Dendrobium cucullatum (pierardii).  I have seen a number of plants of this hybrid and there is a certain degree of variation on flower size, the color has been the same in all the flowers.  The plants I have seen fall into two broad types, the ones that favor the flower size of the anosmum parent and the ones that are on the cucullatum parent side of the spectrum.  The plants that have flowers that are more similar in size to anosmum tend to produce less flowers that the ones that favor cucullatum, which has smaller flowers.  I personally like the type that produces the smaller flowers.  None of the plants I have seen have had any fragrance that I could detect.
This plant is a vigorous grower under my local climatic conditions and the care it receives is the same that my anosmum plants are given http://ricardogupi.blogspot.com/2008/10/dendrobium-anosmum-when-cultured-so.html.
To my surprise I have found that my clone of this plant is less tolerant of exposure to full sun than the clones I have of the parental species.  Plants grown with an exposure to a few hours of morning sun are smaller and weaker that those that are under shadier conditions.  It is unclear whether this is a result of an endemic susceptibility of this hybrid or a particularity of my clone.
My plant produces flowers that are brightly colored when they open but that become lighter in color as they age.  As a result the plants are at their most beautiful in the first few days after the flowers open.  My clone of this hybrid produces canes that are shorter than those of most anosmum and cucullatum clones I have even though it is grown under the same conditions that they are.   Since some of my cucullatum and anosmum plants can produce six feet long canes I can only surmise the plants that were used as parents for this hybrid were of a smaller stature. This plant produces keikis fairly frequently in older canes and the keikis grow well with routine care.  Sometimes the base of the older canes succumbs to rot but the rest of the cane stays alive.  When this happens I put the cane in a shady and humid area and very often the cane will produce one or more keikis.