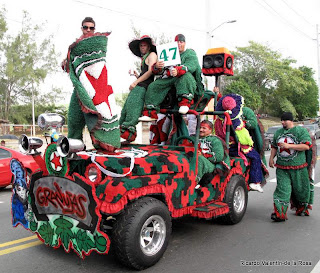 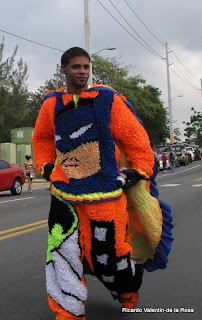 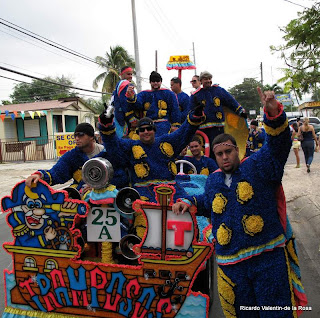 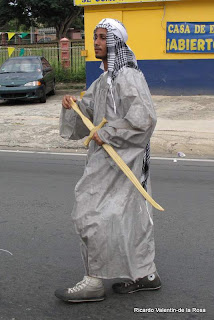 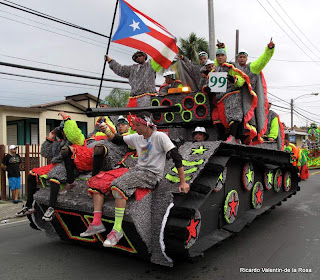 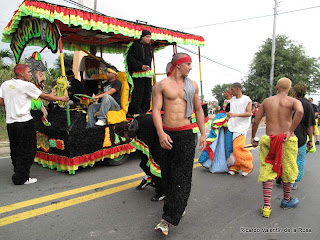 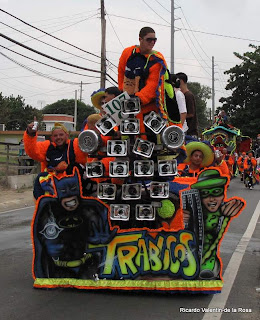 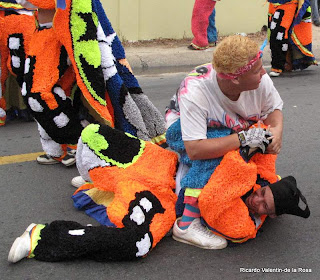 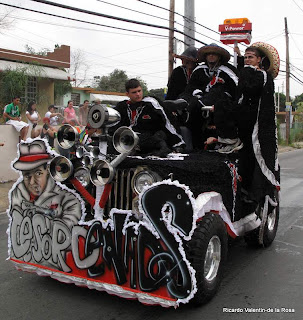 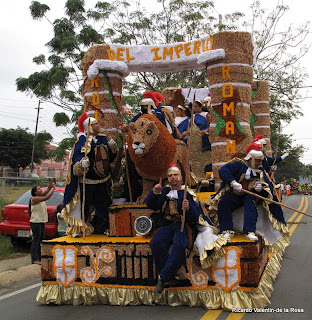 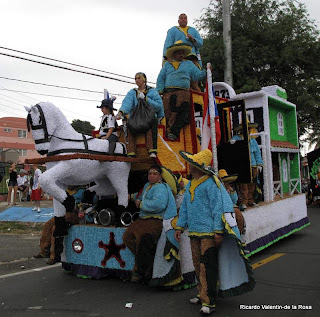 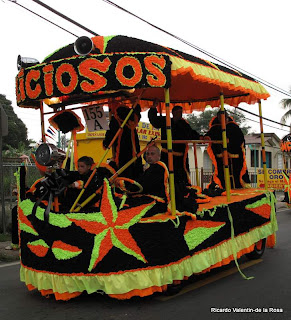 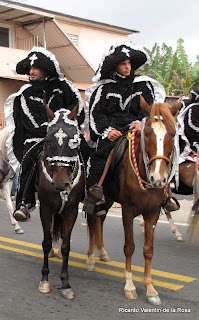 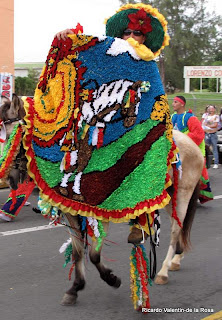 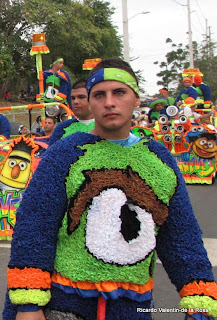 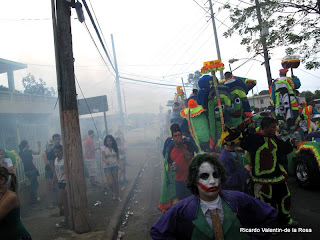 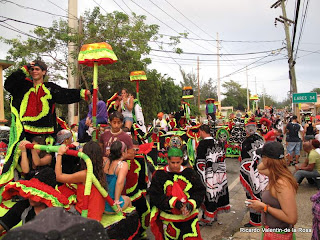 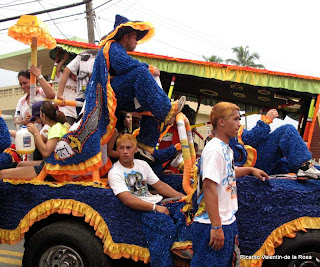 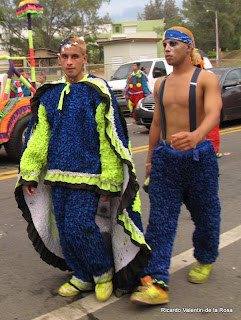 In Puerto Rico there are many traditional activities during the Christmas period.  Among the most distinctive is the Festival de las Mascaras de Hatillo.  To say it is distinctive is an understatement, it is an truly unique sense overwhelming experience that is not for the faint hearted or those with delicate sensibilities.   Although the origin of the activity is rooted on the remembrance of the biblical history about children killed by Herod the Great in Bethlehem, the activity in its present form shows little that is recognizable of the traditional history.  Because of my training in biology to me the Mascaras festival resembles a huge bird lek.
The lek behavior in birds is a form of cooperative mating display.  In a lek the males display in a group for the females.   In the Mascaras Festival males (and rarely females) form groups that dress in a particular distinctive manner and that ride into the festival in one or more floats decorated in bright often clashing colors.   The most eye catching the float and dresses and the louder the color the better.  Such things as thematic coherence and symbolic unity are disregarded with gleeful enthusiasm.  Sometimes the males play wrestle and end up on the ground but none of the encounters I saw were anything but playful and good natured.
But the bright colors are just part of the experience of the Mascaras, sound is another sense shattering element of the activity.  The level of sound when you are in the thick of the float train is truly unbelievable and it can be fully capable of inflicting permanent nerve damage if you are in front of some of the floats.  I was unfortunate enough to wander in front of one of the floats that had a large array of bullhorns when the float let go with a sound blast.  I am not a particularly nervous person but the sound blast almost made me jump out of my skin.  I had the foresight to put on carefully fitted ear plugs but even then the sheer power of the sound made every air space in my body vibrate in a nauseating manner.  I guess this taught me quite vividly how the floats are able to make their way through the thick of the throng of revelers.
The sense of smell has to deal with an assortment of pungent smells that range from oil and gasoline to burned rubber, shaving cream and sweat.  If it rains lightly the heat makes the area even more fragrant.  Beer and other alcoholic beverages are everywhere and are consumed in quantity with unwonted gusto.
Another noteworthy characteristic is that the participant in the floats play “pranks” on the public, and by the public I mean any shapely female that might catch their fancy.  Usually this means spraying the females with shaving cream but I have seen the young men use chocolate, maple syrup and ketchup.  Ketchup seems to be reserved mostly for use on males.   Most young females don’t seem to mind too much and I had the weird feeling that not having a speck of shaving cream to show for the assistance to the activity was far worse than being smeared with it.
For anyone that might want to assist to this activity I have some advice.  If you want to photograph the floats and the costumed people you have to do it before they wade into the throng.  You need to be nimble on your feet and be alert at all times to avoid being hit by the floats, motorcycles, 4-tracks, bicycles and other assorted vehicles that mix on the road and in an unpredictable manner.  Avoid drinking beer and take small sips of water, you will notice that port-a-potties are not conspicuously present in the photos.  Avoid clusters of young people (especially those with many young women) or you will become collateral damage when the shaving cream, or perhaps even less savory fluids, starts spurting.
Every year Las Mascaras festival reports dozens of minor accidents and people slightly hurt.  I suspect this is an understatement.  So if you want to participate please be forewarned it is a pretty intensive experience that is not for everyone taste.  Personally I found the experience amazing and a photographer’s feast, but one that can be really challenging.

I liked your commentary except for the focus on mating rituals. I think it is quite ridiculous and insulting to compare their behavior to that of birds. Most of the people involved know each other and plan for this through out the year. Many of the girls you refer to are family members of the participants. Maybe that explains why to you they seemed uninterested in the "mating rituals"
Other than that good job and good pictures.

You are wrong in thinking that it is ridiculous to compare their behavior to birds. It is very much like it! The girls may be related to some of the participants but any given girl is related to just a few of the participants. People equal mating rituals with sex, but sex is only the end part of a much, much broader suit of behaviors. Males, all across the spectrum of the animal kingdom, specially young males, try to show their fitness to the females in the form of showcasing their physical prowess, displaying bright colors and engaging in bold eye catching behaviors. All these elements are present in this festivity. You can't deny that there is no other ocassion when the males try to look their best than when in the presence of a winsome group of females.