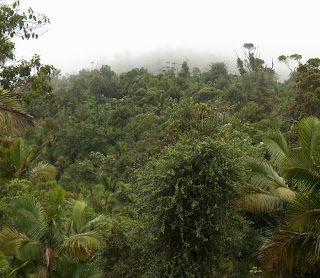 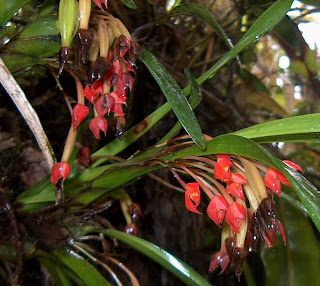 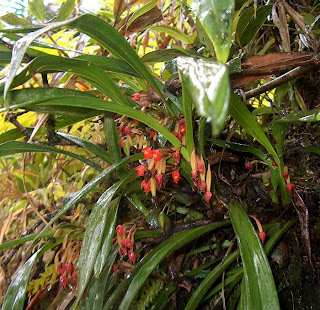 Many seedpods can be seen developing on the different inflorescences 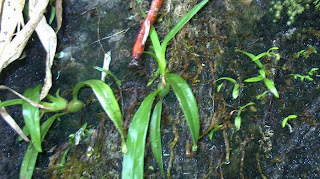 Under the mother plant there are many seedlings growing between mosses
on the bare rock face.
A visit to Max. coccinea habitat
On April 7, 2007 I was in the Rio Grande area in some official business and sacrificed I my lunch hour to make a side trip to the Caribbean National Forest. I wanted to take a look at some orchids whose growth and development I have been observing for several years. The weather was rainy with spells of hard rain and fog interrupted by moments of strong sunlight and then back to rain again. The particular plants I wanted to see are easily reached but I had a hard time photographing them because of the rain. I also had to take in account the fact that the area where they grow was filled by an invasion, one could almost dare say an infestation, of tourists. I waited for moments when there were no tourists nearby to avoid drawing attention to the plants. I noticed to my dismay that some had disappeared. A large, almost four feet tall plant of Epidendrum longicarpum was gone, also missing were several good sized plants of Epidendrum borincanum. However the most surprising thing was that only very few plants of Lepanthes woodburyana could be located and the disappearance of Lepanthes sanguinea. These plants were abundant in the area and it used to be that with even with the slightest effort you could locate several plants of L. woodburyana a one or two of L. sanguinea. I have no idea why there were not there, it is extremely unlikely they were collected. Most of the other small flowered orchids were present in good numbers. Maxillaria coccinea is locally common and in favorable habitat is one of the plants most often found in fallen logs and branches. The goal of my visit was to photograph a plant in full bloom. It appears that I arrived slightly late in the season as I found a large number of pollinated flowers.The weather in the area where these M. coccinea thrive is very wet and every surface is covered with plant life of some sort. I know several people that have tried to cultivate the Puerto Rican Maxillaria coccinea, all have failed even though some have used quite ingenious methods to keep the plants in a level of humidity that would be conductive to their survival. It is unclear exactly why plants eventually deteriorate and die but the best guess I can make is that the plants needs a combination of very high humidity, mild temperatures and substrate that are almost impossible to replicate in the hot tropical lowlands without some sort of artificial means. These plants are found at an altitude of 3500 feet in an area that is a National Park and therefore they are safe from the typical threats of habitat destruction and over collection. The area where they grow is visited daily by hundreds, sometimes thousands of tourists but they are usually respectful of the rules and their impact in the area appears to be little. The plants are safe mainly due to the fact that the terrain is so treacherously slippery that most visitors are justly afraid of leaving the trails and having a deadly fall. This is not an idle consideration, in the past imprudent visitors have come to grisly ends by unwisely venturing into the slippery forest floor away from the trails.The plants are growing in an area that is protected from the sun most of the day but that does get full sun for a few hours in the afternoon. There are plants growing all over the place but there were few growing in exposed situations most are under the cover of bushes. The ones in deep shade are small and few flowered.The area where the plant was found receives constant and precipitation almost year round in the form of rain, drizzle, and fog. The area where these plants grow is dominated by sierra palms inter sped with many other kind of tress. Most of the trees are of small stature due to a combination of soil and climate factors.

Temperature: It can range from the high eighties in the middle of the day in the peak of summer to the middle fifties at night in the peak of winter. When I have visited the forest the temperatures have fluctuated between 65F and 75F.

Substrate: Trees, rotten logs, branches, and rocks.Lightning: Light to heavy shade, best growth and flowering in light shade. Watering: The area gets rain almost daily and the soil is saturated and never dries up.

Humidity: 100% at night and only slightly lower during the day.Blooming: I don’t know the blooming season of this species but in this visit many plants had flowers.

Light: A constantly shifting mixture of full sun and cloud filtered light, the orchids were under medium sized bushes that protected them from full sun but allowed a fair amount of light to stricke the orchids underneath.
Posted by Ricardo at 7:20 PM

I see this plant all over the mid- to high ranges of the island-especially in El Yunque (Rio Icacos) and Carite (Patillas). It has to be the most common "native" orchid.

It will not do well in the flatland-true- not enough rain, but will do well below the mist line if it gets enough rain. The flowers are not very impressive: they are small, but they are bright orange and easy to observe.

Ricardo, Almost every time I visited deep in El Yunque, some of these plants were in bloom in the cooler weather. In the warm months, they appear dormant. True--I have never seen these plants at lower elevations, or without constant humidity. Luckily, there seems to be lots of these beauties all over the untrodden highlands of PR--unlike some of the other orchids I have had trouble locating, this one is easy to find, and I don't think will be in danger of disappearing from the Puerto Rican landscape anytime soon. However, online botonists seem impressed that I have "found" any at all. I guess they are rare in some places.

Its a beautifful orchid. Its sad that people collect wild plants. Andys Orchids in California has them for sale, seed propagated. And the site says that the plants are of Puertoriican Origin.