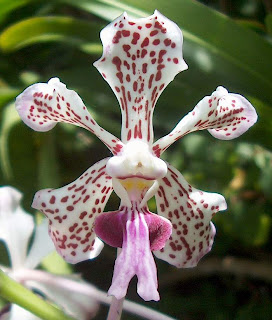 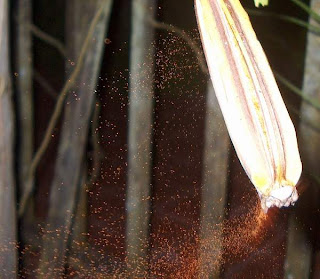 I don't recall ever seeing anywhere a picture of the orchid seed being released from a seed capsule. So I decided to photograph the newly opened capsule of a Vanda tricolor var. suavis that is near my shade house and to share the pictures with all of you that might want to see it. This seed capsule reached maturity after about a year of the flower being pollinated. It was naturally pollinated by a local species of solitary bee. The first time I moved the capsule an impressively dense red cloud of seed was released. Unfortunately I was not able to photograph this event. The photograph shows the second event of seed dispersal. I moved the capsule from side to side to stimulate the release of the seed. You can see as the light weight seed floats in the air as a cloud of reddish points. Every surface in the near proximity of the Vanda was sprinkled with some seed but the Phaius plants growing near had their leaves covered with a particularly generous dusting of seeds. It is uncertain if any seed will survive as we are in the peak of the dry season. But just in case I will be on the lookout for any seedling that might develop in near by in any orchid pot, you never know!
Posted by Ricardo at 10:28 PM

Stunningly amazing. Excellent photo and explanation of process. Thank you.