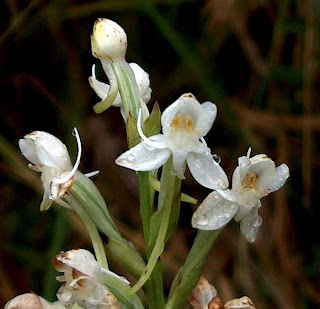 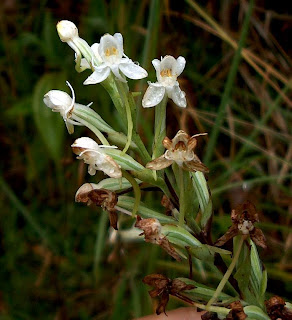 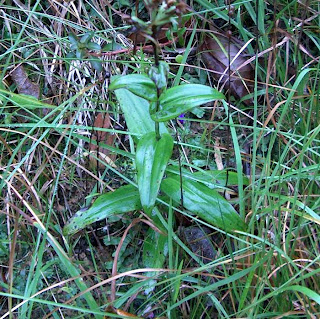 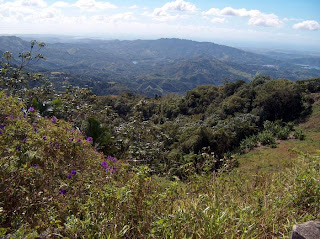 
I took a longer than usual vacation this December and used the extra time to drive around and photograph orchids. One of the plants I found was Habenaria monorrhiza.Unlike most orchids this plant can be found growing in roadside ditches. I only found it at the higher elevation roadsides, in areas over 2500 feet in altitude. Supposedly it can grow at lower altitudes but I have never seen it in the lowlands. The plants I saw were small and few flowered. It is possible that I missed most plants in the population due to the tangle of growths in the roadsides at higher elevations. The orchids were not particularly hard to see but the many types of plants growing in the roadside plus the fact that there was a white flowered weed species flowering at the time, made spotting this plant somewhat difficult. This plant was seen near Orocovis, close to the geographical center of the island. I have never seen this plant in cultivation or in exhibition anywhere in the island so I suspect that it either dies in cultivation, local growers find it too plain to spend any time and effort growing it or most likely it is not recognized as being an orchid. This orchid should be enjoyed in its habitat and not collected.


Temperature: Possibly middle eighties during the day, down into the sixties or lower at night.


Substrate: It appeared to be dense waterlogged clay soil.


Lightning: Half the day full sunlight, the rest bright shadow.


Humidity: 100% at night, probably in the nineties during the day.Blooming: In autumn and winter (Ackermann, J. D., Orchids of PR and The Virgin Islands) apparently a few plant can be found in bloom at any time in the year.
Posted by Ricardo at 8:29 PM

I am guessing I must have stepped over this creature a thousand times, and not seen it!