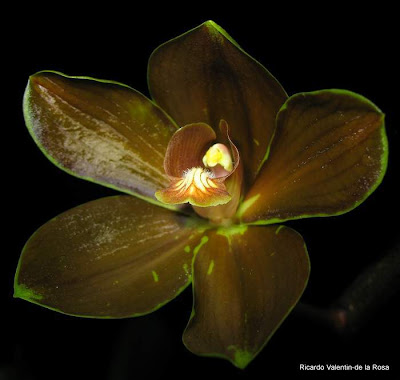 This is the normal flower of the species


I brought this plant as a seedling around 1990, I think I brought it from H&R orchids in Hawaii.  Following the recommendations of other orchid growers and from seeing plants in orchid shows, I planted mine in a slab of tree fern.  The plant thrived and by 1993 it was flowering.  But them the plant started to decline.  At first I was puzzled because there had been no significant change in any parameter relating to the care of the plant and it had not been attacked by any pest.  But then I noticed that the fern plaque was becoming harder and harder to keep clean of ferns, begonias, and other assorted plants that would grow with wanton abandon anytime I became careless in weeding them out.  The reason for the decline became clear when I noticed that the base of the root basket these plants make had died and was decaying.  It turned out that the fern plaque, as it decayed, was holding too much water.  This meant that the root mass of the Grammatophyllum would never dry at the base; this meant death for the active roots and accelerated decay for the dead ones.

In the end, my formerly large plant, became three clusters of sorry looking pseudobulbs with few live roots.  I decided to try something different with this species.  I potted the plants in plastic pots that had a small reservoir of water at the bottom.  The pot was filled with rocks, Styrofoam and bark pieces.  The plants were tied on top of the pots because they had few living roots to anchor them in the media.  With time the little plants sent their roots into the pots and then began producing their characteristic root basket.  I repotted these plants in 1994 and they are still in the original plastic pots.  However, at the same time they are not in the pots at all, what happened was that as the plants grew in size they produced a large root basket and as pseudobulbs grew upward the living roots essentially abandoned the pot and grew into the mass of the root basket composed of the previous year root growth.  Nowadays the plants are still attached to the plastic pots by their massive root mass but the living roots are all independent of the pot.  I have not removed the pots because they are a convenient counterweight when the plants produce their massive inflorescence.

If there is any advice that I consider most important in the care and culture of this plant is that you should strive to keep the root basket that these plants naturally produce around their pseudobulbs in a good state.  This means that you should allow the root basket to dry between waterings to avoid killing the roots.  If the root basket decays  this can cause a severe setback for your plant.  Actually the key is allowing the best possible drainage and plenty of air flow around the root mass as it is not excess water that kills the roots but lack of oxygen.

This plant can produce an impressively large, massive inflorescence that can seem at odds with the size of the plant.  I recommend this orchid to those that don’t have space to grow Grammatophyllum speciosum but can accommodate a smaller plant.  So far Gram. elegans has proved to be relatively easy to care as long as you respect its need to have exposed roots that are not kept wet all the time.

Unlike Gramm. speciosum, Gramm. elegans doesn’t take a decade to grow to blooming size, its blooming seems to be controlled by the size of the last mature pseudobulb.  It has been my experience that large pseudobulbs that are at least four or more inches tall will bloom, smaller ones won’t.  The larger the size of the pseudobulbs of a given plant the more spectacular the inflorescence.  A relatively small plant with pseudobulbs five or six inches tall can produce an inflorescence five or six feet tall with dozens of large flowers.   Inflorescences can grow to such size and weight that they can destabilize the plant so care is needed to fasten the pot of the plant firmly to its basket or base.  Inflorescences can be staked or allowed to grow in a pendulous manner.  I have both trained inflorescences upright and allowed them to hang naturally and I personally prefer the trained ones.  The only significant problem when this plant is blooming is the need to keep the inflorescence safe from snail and slugs which seem capable of sensing the tender tip of the inflorescence from afar.

Media: Any material that resists decay, after the root basket formed, none.

Fertilizing: 20-20-20 every week during the growing season. When it has a root basket of a significant size I put a few pieces of very dry horse manure on top of the root mass at the start of the growing season and keep replacing them as they degrade and are washed away by the rain.  Feeding this plant conscientiously during its growing season is the key for producing the large pseudobulbs that are the key to blooming this species.

Light: Full morning sun, light shade after midday, It gets this regime because it is what is available on the only spot that I had to put this plant.

Temperature: From 95F high during the day in summer to 60F during the night in winter.
Posted by Ricardo at 9:43 PM