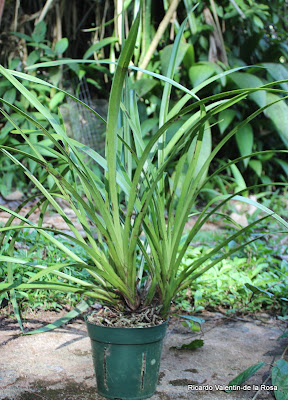 For many years I have admired the flowers of the Cymbidium hybrids derived from cool growing species.  However I never grew them because my local climatic conditions don’t provide the low temperatures needed to initiate blooming in these hybrids.  However in recent years a number of “warm tolerant” hybrids have appeared that hold the promise that they might bloom under my conditions.
A few years ago I decided to experiment and see how one of these “warm tolerant” Cymbidium would fare in my garden.  Over the years I have seen friends buy big standard Cymbidium, which were large plants with impressive flowers, and then witnessed the slow deterioration of the plants.  I wondered, whether it was due to the local temperatures of maybe that my friends didn’t cultivate the plants properly.
So I brought a small seedling of Cymbidium Swan Lake 'Bayfront Park' from Carter and Holmes.  I potted the plant in a standard six inch pot, in bark with a one inch deep layer of Styrofoam chips at the bottom of the pot to ensure proper aeration and drainage.  The plant grew slowly but uneventfully with the same care I give all my other orchids except that for this plant I put a small amount of horse manure over the media at the start of the rainy season.
After a year had gone by I took the plant out of the pot to see how the roots were doing.  I was quite pleased to note that the orchid had developed a good root system.  In fact it almost looked out of proportion with the amount of leaves the plant had.  The plant had completely filled the pot with its roots.  Even the part of the Styrofoam chips was filled.
I moved the plant to a taller six inch pot but I worried that the roots would rot in a pot of this shape.  So I cut openings on the side of the pot at regular intervals (see photo).  This might seem as overkill but I have good reasons to do this.  In my locality, which is at a 1,000 feet of elevation on the mountainous interior of the island of Puerto Rico, in the summer, it rains every day.  And when it rains, it is not a gently falling drizzle but a fierce downpour that swamps everything.   As a result the media inside the pots can stay sopping wet, not for days or weeks but for months on end.   I have learned, from bitter experience that any plant whose pot lack excellent drainage and aeration will lose its roots to rot over the summer season.
The plant has been growing well and by early this year the new growths were at the edge of the pot.  I decided to repot the plant to give more space to the new growths to develop.  When I took the plant out of the pot I found that the roots were in perfect shape and filled the pot completely.  I didn’t find even a single spot of root rot.  I left the root ball in a single piece and moved it to a larger pot.  Hopefully this will help the plant produce even larger pseudobulbs in this year and maybe then it will bloom. 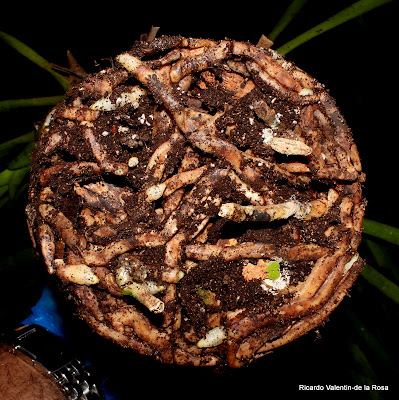 The plant grew quite large and vigorous but didn't produce an inflorescence until early this year after an unusual spell of cool weather. Unfortunately for reasons that are not clear, the inflorescence turned black and died.