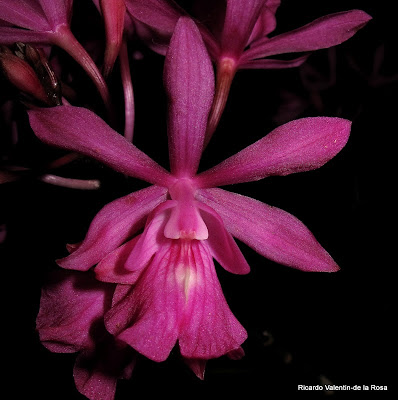 This interesting plant is an hybrid of Psychilis macconnelliae (which was the seed parent) and Broughtonia sanguinea (which was the pollen parent).  It was registered in 2004 by J. R. Fernandez..  We can see that the influence of the Psychilis parent was overwhelming, you would have a hard time guessing which was the other parent from looking at this plant.  The color is highly reminiscent of Psychilis kraenzlinii, however the flower size and shape clearly distinguishes it from that species.  The white spot on the lip makes me suspect that the Puerto Rican plant of macconnelliae was used on this hybrid rather than a plant from St. Croix.  Hybrids with Psychilis are uncommon, in the ones that I have seen, the Psychilis influence is very dominant. 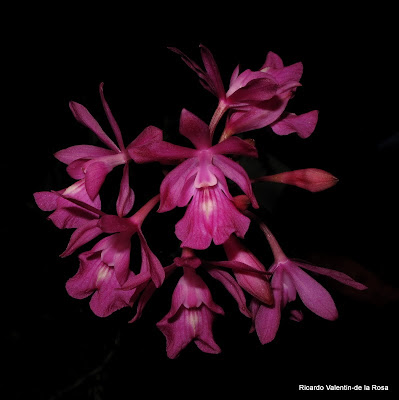 This hybrid was exhibited by Edwin Alberto Perez.  I want to thank Irma Saldana because she helped me find the information and parentage of this hybrid as registed on the Royal Horticultural Society.
Posted by Ricardo at 3:12 PM