A yellow Epidendrum ciliare and an apparently fearsome night visitor 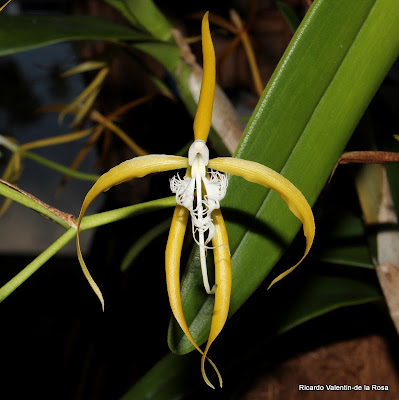 In January, I was in St. Croix and had the opportunity to see the wonderful orchid collection of Edna Hamilton, the President of the St. Croix Orchid society.  There I saw several plants of Epidendrum ciliare.  One of the plants has the peculiarity that its petals and sepals are not green as they are in the typical Epi. ciliare plant.  In this flower, which originated in Vieques, the floral segments are yellow.   At night these flowers are wonderfully fragrant.  It was nighttime when, as I was talking with Edna, I noticed a flash of bright red color moving among the flowers of this orchid.   Initially it appeared like a tarantula wasp was in the flower.  Edna was less than enthused with the insect, and with good reason, tarantula wasps can deliver one of the most painful stings in the insect world, only the bullet ant can deliver worse.  It has been described as "inmediate, excruciating pain that simply shuts down one's ability do to anything, except perhaps, scream.  Mental discipline simply does not work in these situations," - Justin Schmidt (see Schmidt pain Index).  But as I looked closely at the insect I realized that the "tarantula wasp" was in fact a moth. The mimicry was pretty good but the body proportions of the insect revealed that it was a deception.  The moth moved over the flower for a few moments and then left. 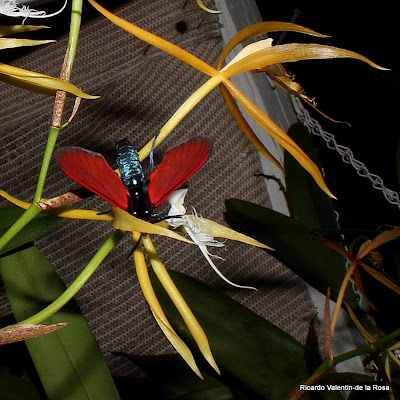 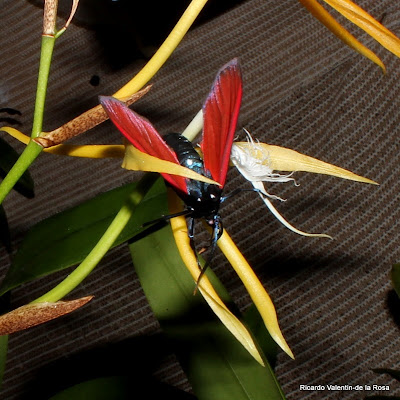 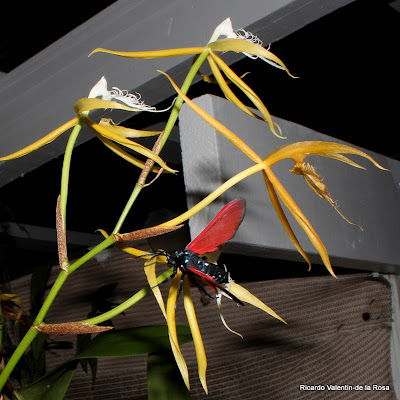