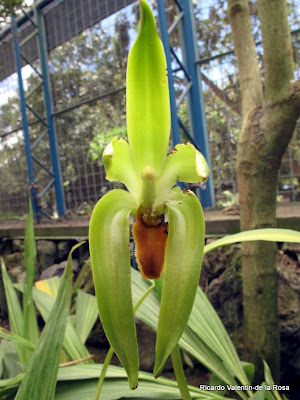 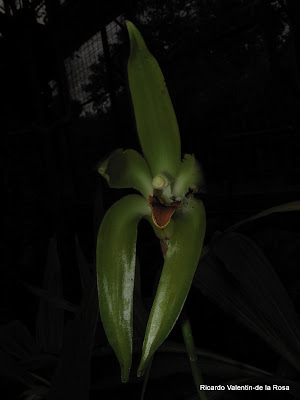 This orchid is a fairly large plant with meter long inflorescenses.  The flowers are variable in color, these were apple green.  It is found in Venezuela, Colombia, Ecuador and Peru.  It is a cool grower that lives high in the Andes.  I saw this plant in the Jardin Botanico de Quito, in Quito, the capital of Ecuador.  The inflorescenses were growing among the leaves with the result that the flowers were hidden from sight.  I detected the flowers because I could see the inflorescences arising from the pseudobulbs.  The plants were exhibited as terrestrials so flowers were near the ground.  This orchid formed a large clump but had just a few inflorescences.  This orchid has been known by a number of scientific names, Lycaste gigantea var. labelloviridis, Ida grandis, Ida labelloviridis and Sudamerlycaste grandis.
Posted by Ricardo at 5:56 PM