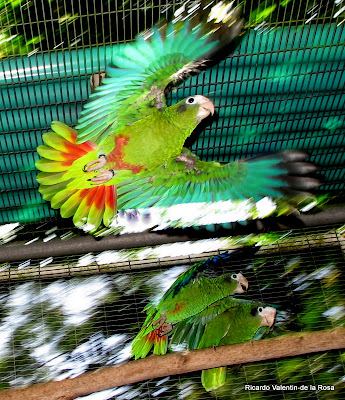 This photo shows particularly well the belly area of a hispaniolan parrot.  The colors of the belly of the hispaniolan parrot can be used, along with other things, to ID this species.  One of the most distictive characteristics of the hispaniolan parrot is its white forehead.  The blue patches just behind the eyes are also useful to identify this species.  But it is the combined observation of the various traits that can give you the best confidence that you have correctly identifed this species.  In this photo you can see the white forehead, the blue patch behind the eye, the red patches in front of the legs and the red tail feathers.  This bird was photographed in one of the Rio Abajo aviary flight cages.  Hispaniolan parrots are used here as foster parent to eggs and chicks of the Puerto Rican parrot.  They are not for sale.  A selected few of these birds stay in the project their entire life where they receive exactly same care as the PR parrots.  Because the hispanionan parrots on ocasion are allowed to raise their own chicks, we produce a small number of birds of this species.  Some of the chicks stay in the program, most are sent to the Dominican Republic where a number of them have been released into the wild in El Parque del Este.  The USFWS sometimes keeps a few in the Iguaca aviary hispaniolan flock. 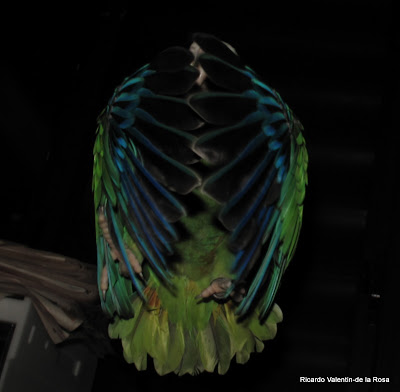 Here you can see the flight feathers.  The flight feathers are black and navy blue.  The colors of the flight feathers of the hispaniolan parrots is different from the color of the same feathers in the PR parrot.  In the PR parrot the flight feathers are turquoise.  This photo is of Ivan.  He if flying in the Rio Abajo bird hospital room.  Sometimes birds have to be hospitalized for a few days to receive treatments.  If they are alone in the hospital they can become depressed.  Ivan was born in May 2012, I plan to use him as a companion parrot to birds in the hospital.  Ivan is relaxed among humans and is familiar with the inside of office and the hospital.  I hope his generally unstressed demeanor among humans will be reassuring to birds in the hospital.  I have to add that infectious diseases are extremely rare in the RA aviary, almost all the birds that end up in the hospital do so because they need treatment for accidents or scrapes due to fighting .  After a few days of antibiotics they are sent back to their cages none worse for the wear.  In the case of a suspicion of an infectious disease we have a separate quarantine building that is used for this cases.
Posted by Ricardo at 8:21 PM

I was told a population of these birds exists in the wild on Puerto Rico. Any pictures of hoe?

Idon't have pictures of this species in the wild in PR. The only parrot that I have seen in the wild with a white forehead is some Amazona albifrons in the UPR campus in Mayaguez.

Are you still involved with parrots? It would be great to hear more about the progress with this program and these birds. :)

Are you/the program raising birds to release in the wild? Do you have a section on your blog that explains this program in further detail or possibly a link? I have heard that parrot releases are notoriously difficult b/c of so many behavioral factors like predator avoidance. I don't have any personal experience with Amazons but I have a couple parrots myself so I always enjoy hearing about them.

Have a good one.