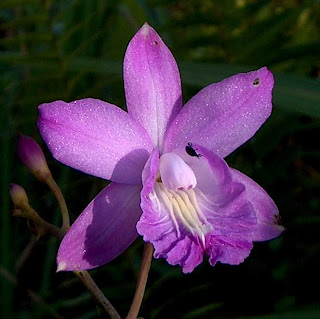 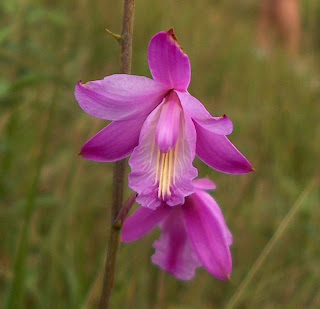 This flowers show a typical coloration,
they were growing a few feet from the pale colored flower. 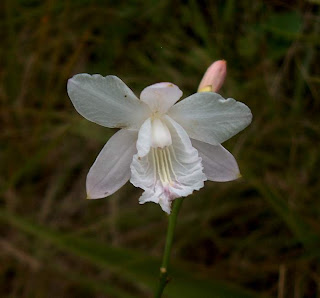 Every so often I grab my backpack and hike into the island forests looking for orchids. I was lucky enough to secure the company of a friend who is just giving up smoking and was quite desperate for anything that would keep his mind off smoking and him away from other smokers. After a few hours of hiking we came upon a huge area where, for some reason, the all vegetation was killed some years ago by the government. Plants have been slow to colonize this patch but you could see here and there small Bletia patula plants growing inter sped with a host of pioneer plant species, mostly grasses. Unfortunately there was only a single B. patula plant in bloom that I could see in the whole area. When I was photographing the plant my friend calling at me from some distance away telling about a plant that might be an orchid. Looking at the plant from a distance I assumed that probably it was the white form of Spathoglottis plicata, which can be found by the thousands in some valleys in the central mountains. But I decided to take a look just in case. When I got near the plant i realized that it could be a Spathoglottis, it had the wrong shape and the inflorescence was too short. Initially I was quite excited at the prospect of having found an alba form of Bletia patula, however the buds were light pink even if the flower was almost white. I have seen groups many thousands of plants of B. patula in many places in the northwestern part of the island and I have never seen a white form. I might be wrong but as far as I know only one alba form of this species has ever been found. This plant is not an alba, but what it could be called, a near alba, semi alba? I am posting a photo here in the hope that someone who knows more about this species might offer some enlightening comment on this plant. By the way I didn't collect this plant, I can't say I wasn't mighty tempted but decided that it will remain in place until I can ascertain if the government plans to eradicate the plants in the area again. In case that the government has plans to keep killing the vegetation in this spot(I think it is done with herbicides) I will move the plant to a secure place inside a state forest where I can keep visiting it. It is possible that I would have missed this plant completely if my friend had not looked at it closely mainly because I would not have associated the light color flowers nodding in the distance with B. patula flowers.
Posted by Ricardo at 12:36 PM

I see these plants all over karst country, in disturbed areas, right along the roadside, always in a moist area, at a angle, with lots of runoff and some sun. They are delightful, terrestrial, and not a dainty looking as they appear. They are a hearty, opportunistic plant. Finding a white mutant is wonderful! Somebody was trying to sell a white one on ebay (Japan)...