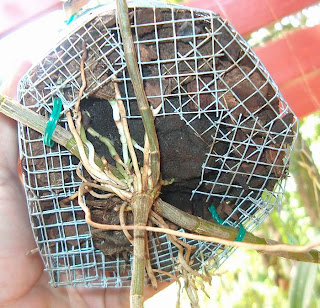 Late last year I was offered a large, two cane keiki, of Dendrobium anomum var. huttonii (it was a particularly fine example of this semi-alba type). It was an offer I could not refuse, as high quality plants of these type are seldom offered for sale. Unfortunately the keiki was attached to a cane of the mother plant that had been bent until it was attached to the mount of the mother plant. This was done to let the keiki attach itself to the fern pole where the mother plant was growing. This meant that removing the keiki would result in a loss of most of its roots. This would result in a severe setback for this young plant and could add years to the wait for flowers. Cutting a piece of the mount was out of question as this would damage the mother plant root ball.Several measures were taken to insure that the keiki would not be set back too severely. These are detailed in the following paragraphs so you can use them if there is the need.It is important to note that what I did can be generalized to other Dendrobiums relatively similar in growth to anosmum such as aphyllum, primulinum, lituiflorum and parishii. However this method might not be advisable with other dendrobium groups.The first thing done was to cut a generous portion of the cane that held the keiki to have as much reserve tissue for the keiki as possible, the keiki was not detached from the cane. Then the unattached roots were NOT PUT IN the potting mix. Roots that develop in the air fare very poorly when buried in the media.These dendrobiums need heavy fertilizing and watering when in full growth, the few measly roots this plant had would not suffice to sustain good growth if it didn't receive intensive care for the first few months. So a creative solution was need to insure the plant got enough humidity and fertilizer, in those critical first months.I made a wire basket with a hole in the bottom. The basket was filled with media that was composed of bark and horse manure. The media was carefully arranged inside the basket. In the center just over where the keiki the basket had (the keiki was very firmly attached so it would not wiggle and damage fragile new roots) a core of very hard, dry horse manure pieces. The horse manure core was put in so that water would drip over the base of the keiki every time the mix got wet. the horse manure core was surrounded by medium size bark so that the plant was provided with an open, oxygenated area where the roots could grow and attach. The bark also concealed the manure which could be an offensive sight for some.The keiki was attached to the bottom of the basket so that the plant would grow and hang like they do in nature. The first few weeks the plant produced a few roots that grew slowly, however as it developed a larger root mass, root production accelerated and it started embracing the media. As you can see in the photos the plant is producing many, many roots and they are rapidly infiltrating the media. The green root tips of the developing roots are quite long, an indication of vigorous root growth. Hopefully this plant will bloom next year. If you compare this potting strategy with a previous post by me on potting of dendrobiums of the spathulata/phalaenanthe group you will notice the strategies are radically different. This shows the need to do some experimenting when growing your own plants and the fact that there is no one size fits all way of growing these magnificent orchids.The brown roots hanging in the air are the original air roots that survived the removal of the keiki from the mount, every other root is new
Posted by Ricardo at 1:27 PM