Tetramica elegans in the southwest of Puerto Rico 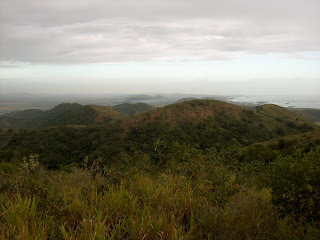 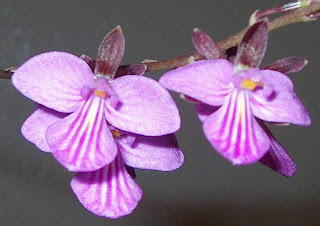 Tetramica sp, a plant in an orchid collection, the yellow mark in the lip characteristic of elegans is apparently absent. 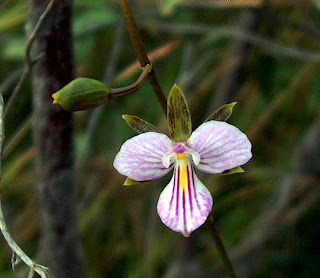 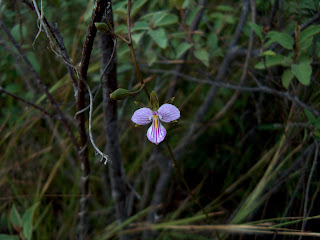 A flowering in the wild 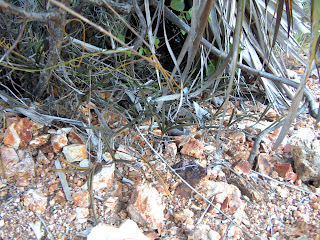 Tetramica plants, growing in the shade of some low shrubs

On December 10 2006, I spent most of the day walking around in the Sierra Bermeja hills. This is a line of hills that go from east to west along western part the south coast of Puerto Rico. I wanted to see how many orchids in bloom I could find. When I visited these hills some twenty years ago I found Vanilla, Encyclia, Epidendrum, Psychilis and Tetramica plants. Unfortunately I found very few orchids in bloom. I saw just one plant of Psychilis, probably P. krugii but since it had no flowers it was impossible to say for sure. Most of what I found was a large number of invasive pioneer species. A huge area was completely dominated by a grass, Panicum maximum that was about five feet tall and made walking difficult. Not even a single orchid was found in the area dominated by the Panicum grass.

After almost three hours of walking up and down a rugged hilly terrain we arrived at an area that mostly devoid of grass, with justa few tough, low, scrawny looking shrubs and low palm trees. In this spot, under the shrubs, were the Tetramicra plants. There was no soil visible just a rocky pavement. The Tetramicra plants were growing under the shrubs in a tangle of growths with most of the plants a few inches over the gravel. The plants roots were thick and whitish. The roots held the plants in a stilt like way, two to three inches over the gravel, it appears the roots went some way under the gravel. Most plants seemed to have only two or three roots under each growth. Although there were dozens, if not hundreds, of growths under each shrub, very few were in bloom in the area I examined.

The plants are dull colored and hard to see. Most of the plants are quite small, two or three inches tall and showed no sign of having bloomed. The plants I found in bloom were four to five inches tall. The inflorescences were about a foot tall and raised the blooms just barely over the surrounding vegetation. Two of the inflorescences had branches but only one of the branches was blooming. Although it seems there are probably many thousands of plants in the area I visited it is probable that they were more widespread in the past in the area invaded by the Panicum grass. I talked for a while with a local denizen and he remarked that the spread of the grass has been probably due to wetter weather that usual in the area. He also said that there had been some large fires in the grassy area. Another area person said that the grass had invaded some areas of the hills that used to be almost bare loose gravel. I suspect that human activity in the form of cutting down native vegetation, might have been an important factor in allowing the grass to dominate the area so completely.

By the time my group reached the area where the Tetramica grew it was late in the day and I had little time to make habitat observations. Here are some of these observations.Temperature: Temperatures can reach into the high nineties in summer during the day. Between December and February night temperatures can go down to the low sixties, most often, night temperatures are in the middle seventies range.  Substrate: Loose gravel composed of angular pebbles, the plants were growing over the gravel with the roots going into crevices and cracks in the rocks and gravel. Light: This spot gets very harsh full tropical sunlight, with little relief from clouds for prolonged spells as the area has a pronounced dry season. However the plants are growing under bushes where they get some protection from the sun.  Watering. Although this particular area has a seasonally wet and dry season, there is a nearby lagoon that supplies some humidity to in the form of fog year round.  Blooming: In volume four of Withner’s book series about Cattleya relatives, Tetramica elegans is said to bloom between January and March. This might explain the scarcity of blooming specimens during my visit.
Posted by Ricardo at 5:17 PM

I went walking through the bosque seco, really nice. I started at Tamarindo beach and walked east. There were plenty of psychillus krugii but I did not see any tetramicra. Do these occupy the same habitat as tetramicra or is the Bosque seco too dry. I wrote to you through the AOS as kevin in rincon. Another question if I may, do you know of any orchid societies around Rincon/Mayaguez area

Hi, Kevin! I have not seen Tetramicra in Guanica, I don;t think the dry forest is too dry for them as they can grow into bare rock. I suspect the reason is probably that the habitat in the dry forest is not favorable for the germination of the Tetramica seeds. Yes there is an Orchid society in Mayaguez. I will look for a contact number and will post it here,