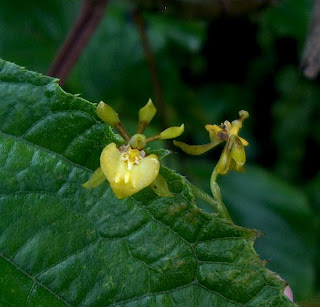 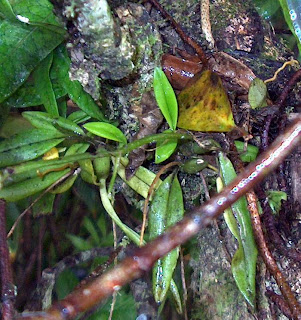 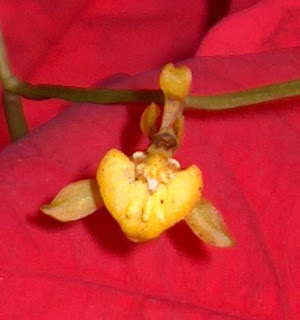 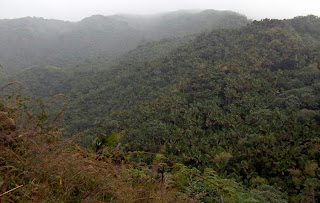 The Sierra Palm forest, habitat of this orchid 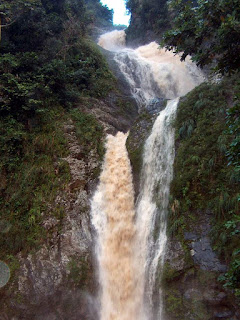 Dona Juana waterfall, in the habitat of this orchid


I spent December 12, 13 and 14 of 2006, driving around the mountainous interior of the island of Puerto Rico. I am lucky enough to have a friend, J. Alvarez that doesn’t mind driving meanwhile I keep an eye out for orchids. I saw a great many plants, mostly Epidendrum, almost all without flowers. Wiggling through a heavily forested section of Palm forest I was lucky enough to find a fallen branch with some Oncidium plants in flower and in fruit. It is not often that I see these plants at all let alone in bloom. In my experience plants that hail from the Sierra Palm forest or the higher Elfin forest are doomed to die when cultivated in the lowland environment in Puerto Rico, they are best left in place. The plants die because the average grower in PR lacks the necessary equipment to provide the proper environment for these cloud forest ephiphytes.The Oncidium was found at an altitude of more than 3,500 feet in one of the highest peaks of the island of PR. The tree that harbored the plants was loaded with ephiphytes of all kinds as well as many plants of this Oncidium. The plants are in little danger of being collected due to the fact that the tree that harbors them grows alongside a dizzying high cliff. Reaching even the lowest branch means risking life and limb. Fortunately a broken branch was caught in a tangle of vines that prevented it from falling into oblivion. The plant was photographed in situ. Almost all plants had fruits and a few had flowers. The plants are tiny and easily confused with seedlings of the much more common Oncidium altissimun. The plants pseudobulbs and all are at most three to four inches tall. The inflorescenses are about three to four inches long. The plants are not conspicuous and the flowers are small and easily missed if you are not familiar with these orchids. The branch was sopping wet and mostly rotted, its surface loaded with fungi and sundry ephiphytes. No plants were seen in any of the trees that were near the host tree or in the palms. My books say this plant is Oncidium meirax.The area where the plant was found receives constant and precipitation almost year round in the form of rain, drizzle, and fog. The area where the plant was found is dominated by Sierra palm, with possibly thousands of palms growing together in dense strands. I kept to the edge of the forest because the ground was so slippery that there was the constant threat of falling. Given the steep mountain sides and the ubiquitous rocks I had to thread exceedingly carefully around the tree roots. Here are some of my observations.
Temperature: It can range from the high eighties in the middle of the day in the peak of summer to the middle fifties at night in the peak of winter. When I have visited the forest the temperatures have fluctuated between 65F and 80F.
Substrate: Sopping wet wood full of all manner of fungi and roots and other ephiphytes. Everything in the area was dripping water when I visited the spot.
Lightning: Very variable often going from one extreme of the spectrum to the other in manner of minutes. The plants are protected from the worst of it by the canopy of leaves of the host tree but since some of the plants I saw were growing high on the tree it is probable they are subjected to a constantly changing level of light exposure that went from very harsh direct sunlight to low diffused light when fog envelopes the forest.
Watering: It rains constantly, the area I visited probably get more than 160 inches of rain a year. Except for a few weeks during the dry season, it is probable these plants are drenched almost round the clock day in and day out.Humidity: 100% at night almost every night of the year. Probably close to 100% during the day for most of the year.Blooming: I found a few plants with flowers, I don’t know if this is this plant flowering season.The place was windy during my visit, it is clear from the shape of the trees that the area can get high winds with some regularity.
Posted by Ricardo at 8:10 PM

I agree with your comments' most of the higher elevation plants will not do well in the flatlands since they need cool nights and constant dripping moisture....