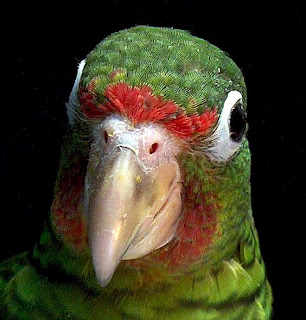 One of the ten most endangered species of parrot in the world, the PR parrot is the focus of an intense effort to restore its populations. A formerly extremely abundant bird whose population was counted in the hundred of thousands if not in millions, it s wild population suffered a catastrophic decline and dwindled to 13 in the 1970's due to habitat loss and other causes. Now there are about 280 individuals and two wild populations, including a new one in the Karst region of Puerto Rico that has about twenty birds. I post this photo to invite you to think of all the species that are in jeopardy due to habitat destruction and unwise resource exploitation. Some of endangered species are superbly adapted to their enviroment but have great trouble dealing with highly unnatural pressures such as being captured for the pet market (one of the reasons for the decline of the PR parrot). I have dedicated my life to save these extraordinary creatures which are profoundly emotive, very independent and a true nightmare to breed in captivity.

There are various posts in this blog about dufferent aspects of the life and biology of Amazona vittata both in captivity and in the wild.