﻿ ﻿
I brought this orchid in the nineties, around 1995. It came from Hausemann’s Orchids in Illinois. I brought it because I remembered the delicious fragrance of white Cattleya I had experienced when I was young and I wanted a plant that embodied the pinnacle of white Cattleya breeding. This plant grew well in a shade house in the coastal region of Puerto Rico and eventually produced shapely and fragrant white flowers. In the year 2000 I took it to the Rio Abajo forest, where I work, this proved to be a mistake. The plant had been potted in a media mix that was perfect for the drier, hotter, climatic conditions of the coastal plains but the potting mix was unsuitable for the much wetter, colder weather that is prevalent at certain times of the year in the mountainous interior of the island. The potting mix started decomposing at an accelerated rate and the resulting debris blocked the flow of oxygen to the roots. The result was that the plant lost its roots. To make things even worse, a black rot started invading the pseudobulbs. When I noticed the plant was in trouble, in 2001, it was almost too late to save it. I took the plant out of the pot and carefully, and with a sterilized clipper of course, started clipping away dead and infected parts. At the end I finished with just a single healthy pseudobulb with a single living eye.
I despaired at the thought of losing this wonderful plant, so I meticulously planned its potting. The pseudobulb was planted in a custom made wire basket which was filled with the finest, cleanest and hardest bark pieces I could find. By planting this orchid in a basket I made sure that it had perfect drainage and that no matter how much it would rain, the roots would still have plenty of access to oxygen. Also any decayed potting material would fall away from the basket and not sour the media. The plant was kept in a relatively shadowy place at first because it lacked roots but eventually it was moved to a sunnier spot with the other Cattleya. It grew slowly but steadily and in 2007 after a long period of recovery it started blooming again, it has bloomed every year since that date. The photo shows the 2009 blooming. I took the photo when the flowers had been open for just a few days to capture the exquisite immaculate white of the flowers which doesn’t last long because I grow my plants outside where they are exposed to birds, insects and the elements, all of which can damage the flowers. The flowers expanded a bit more after this photo was taken. The moral of the story of this plant is that this orchid is relatively easy to culture but it demands that one pay attention to the state of its roots. 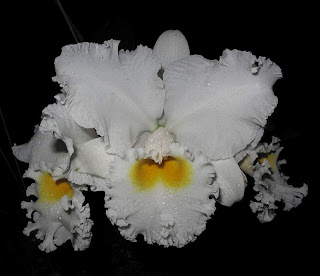