The female red jewel fish Hemichromis lifalili and her fry 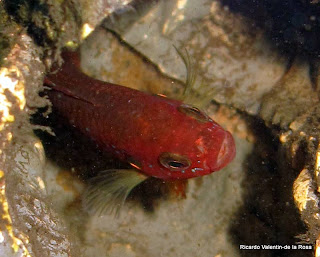 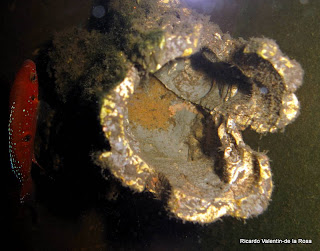 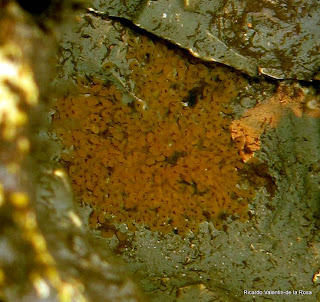 The eggs of the female Hemichromis lifalili about which I wrote in an earlier post hatched during the weekend. The fry are now at the bottom of the cavity where spawning occurred. The fry are full of vibrant activity as they all move their tiny tails incessantly. At this stage of their development they are called fry because they hardly resemble a proper fish. In the image you can see the mass fry but only the yolk sacs can be seen clearly. The yolk sacks are attached to the belly of the fry. The fry are little more than a line of muscle tissue a few millimeters long. Because the fry are vigorously shaking their tiny bodies and are transparent they cannot be seen well in the picture which shows the massed fry. But we can distinguish some black dots above the yolk sacs. These dots give rise to the eyes and nervous system of fishes.
The female defends her fry with impressive ferocity, in the images we can see that it has a bite on the area over the mouth. I do not know which of the fish in the tank bit her but I suspect it was the male with whom she spawned . To my surprise the female was aggressive when the male approached the spawning cave and stopped him from to entering it. She blocked him from entering where the the fry were by arching her body and lifting the scales covering the gills. The male spent most of his time on the other side of the tank with the other fish, his level of aggressiveness was mild compared with that of the female.
The previous spawning that occurred in the tank was the product of the male of this spawning but with a different female. Apparently the male lost interest in that spawning the moment the fry were born and left the female alone to defending their offspring. The female of the previous spawning took the fry from the trunk and hid it in a depression in the material at the bottom of the tank, but she could not defend the fry from the other fish and lost them all.
In a few days the female of this photo also have to move their young to the bottom of the tank to allow them to forage for food. It remains to be seen whether the male will help her defend them. From what I could see the males showed a somewhat ambiguous behavior, he seemed to behave aggressively but at the same time he was obviously eyeing the other females, the latter development does not augur well for the survival of the fry.