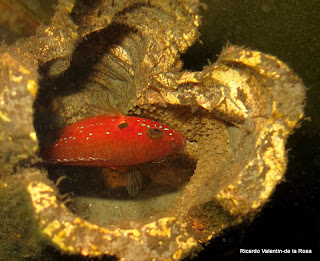 In this image we can see a female lifalili tending her recently spawned eggs. The female is using her pectoral fins to create currents of water over the eggs so that they receive the oxygen they need to live. The female also mouths the eggs. I have read that the female removes from the spawn those eggs that become infected by fungus. This spawn is in an immaculate condition so it seems that the female is successfully managing to control the attack of the fungus on her eggs . This is the second spawning of my lifalili. These fish have been surprisingly precocious, they began to spawn when just a little bit over about two inches in lenght, about four weeks after they are acquired. It is said that adults can reach six inches long but the most of those I've seen locally are no more than four. When these fish are in the process of spawning they become especially aggressive toward other fish. To achieve this image I had to plan carefully how to provide them with a suitable spawning site that would also allow for ease of photographing. The lifalili seem to prefer spawning in enclosed areas. For this reason it is common for aquarists to provide them with terracotta pots usually placed on their side. The problem is that this type of arrangement, in a tank like mine, makes it difficult to photograph the fish caring for the eggs and fry. I put in the tank two pieces of ceramic that resemble a mass of roots and which have at their top tubular cavities that open toward the surface.. To reduce the potential of a spawning in a hidden or inaccessible elsewhere in the tank I do not use any other object that has a cavity suitable for spawning. Since the opening of the cavity is facing the surface it is relatively easy to photograph the female taking care of the eggs.