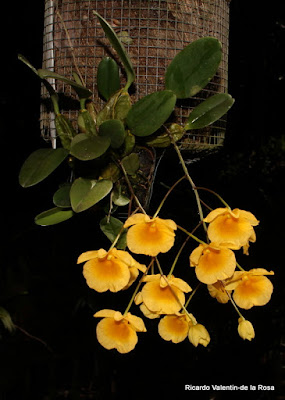 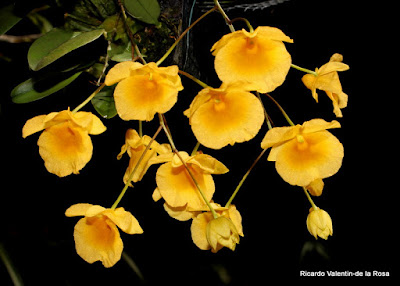 I brought this plant in 2014 and grew one in the shade and another in a spot where it gets four hours of full sunlight in the morning.  The plant in the shade, althought of similar size to the plant in this photos, is yet to bloom.  The plant in the sunny spot has bloomed twice, in 2015 and 2016.  Its care is the same as Dendrobium aggregatum.  I am growing this one on a wire basket lined with coconut fiber and filled with the nest material that I removed from a parrot nest that had raised chicks.   So far both plants have grown equally well, the one in the shade is growing in a dish where its roots can ramble, but it has not produced many roots and some roots are aeria;.  I will move it to a basket and slowly adapt it to more sun.
Posted by Ricardo at 8:15 PM

I also have 2, one in Sunny spot and one in a shade. The one in the shade has not bloomed and hasn't grown many roots for 2 years. I will try moving it to the sun. Thanks for the observation!