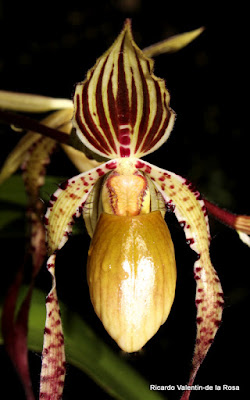 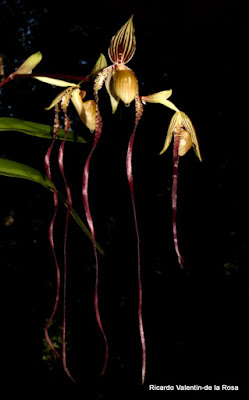 I brought this plant a few years ago and hardly expected that it would bloom in a relatively small plant.  The plant has two leaf fans, a mature, the one that bloomed and one that is still growing.  Compared with the parents the plant bloomed relatively small.  It produced three flowers.  The longest petals measured 13 inches long.  The flowers lasted well, but I cut them after two weeks to allow the plant to spend its energy growing.  I expect this plant to increase significantly in size in the future and to produce even larger inflorescences.  So far this orchid has presented no challenges in its culture.  I keep it with my collection of multiflora Paphiopedium, under the shade of saran cloth.  It is growing in bark in a six inch pot.  It gets watered twice a week and fertilized once or twice a month.
Posted by Ricardo at 12:05 AM