Tolumnia Pink Panther, brought as a sacrificial victim to the gods of orchid culture, it surprised me by not only surviving but thriving. 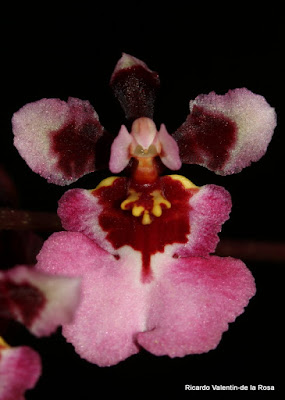 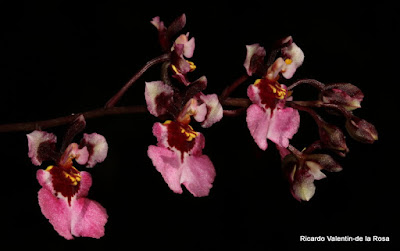 In the past due to a poor understanding of their cultural needs, I sent many a Tolumnias to the great, happy terracota pot in the sky.  I became so frustrated at my inability to grow them that for many years refrained from buying them.  But last year I decided to try a different way of cultivating them.  As a sacrificial victim to the gods of orchid culture, I selected this plant which was on Home Depot on the spot where they put plants that have finished blooming before being sold.  I wanted to buy a cheap one so that if it did die It would not be a great loss.  I put this plant on a flat plastic dish on top of a very thin layer of moss, all the original roots were left exposed and not buried in the media.

The plant gets full sun from sunrise to about 10 am and the rest of the day it is in light shadow.  I fertilize it weekly when it is producing a new fan.  The local temperatures are between 75 and 85 most of the year with low down to the sixties for a few weeks in January and February.

The plant has been growing well and finally bloomed this March.  Now that I know the way that I can keep them alive I plant to add one or two additional plants to my collection.  Hopefully they will do as well as this one.  The plant was identified by my friend, Rene Enrique Garcia Lopez.
Posted by Ricardo at 11:36 PM