Sometimes I use Styrofoam cups instead of foam chips or stones to increase drainage and aireation of the media in which large orchids will grow. 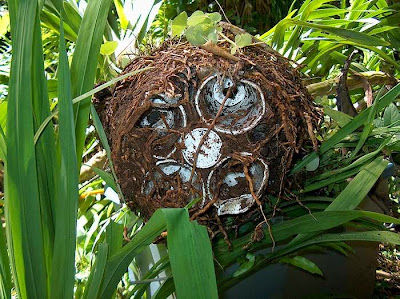 One of the problems of potting very large orchids is that there is the possibility that the large mass of potting media will retain too much water and become anoxic (devoid of oxygen), something that is lethal to orchid roots.   When I had to pot a Grammatophyllum speciosum, I put four styrofoam cups in the bottom of the pot.  I made many holes in the sides of the styrofoam cups to allow air to flow.  I poured the media, in this case bark, over the cups.  As you can see the Grammatophyllum developed a large and healthy root system.  I had to repot because the orchid had become too top heavy.  Because of this, when I pot Grammatophyllums I usually add a layer of gravel to the bottom of the pot to give it stability.  Unfortunately, these plants grow so large that they need the heaviest of pots to keep them stable.
Posted by Ricardo at 7:44 PM