What orchid seed actually looks like; The seeds of Oeceoclades maculata being released from a seed pod in the Rio Abajo forest, Puerto Rico 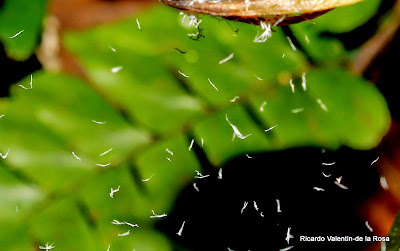 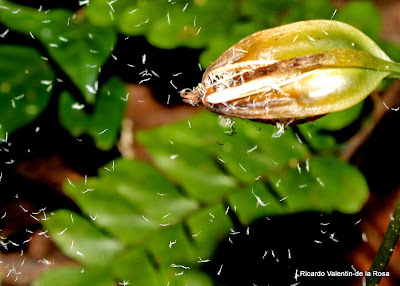 Most orchid growers are unfamiliar with the appearance of the seeds of orchids.  From time to time one sees questions in forums of the Internet of people that have brought "monkey orchid seeds" and are unable to tell if they got actual orchid seeds or some other types of seed.   Orchid seeds are quite small, almost dust like, so if any that has brought the "monkey orchid seeds" gets anything resembling a normal seed, it surely isn't an orchid seed.

I was hiking through the Rio Abajo forest and stumbled upon a group of Oeceoclades maculata with open seed capsules.  I decided to gently shake the stems that held the seed capsules so that they would release the seeds.  In the photos you can see how tiny the seeds are and how the wind quickly wafts them away.
Posted by Ricardo at 7:25 PM

I've made some crosses of my own though I send my pods to a lab I am aware that their seeds are so tiny. But then I've also seen some posts by people with seeds that look more like Morning Glory seeds or something, anything, other than an orchid that they bought online. It's sad this seems to happen frequently, your post is a good reference for those considering buying orchid seeds online.

This sort of reminds me of dandelion seeds blowing in the wind, only smaller still. Good share. :)

Sadly I have seen people posting photos of seeds of Bauhinia, and apparently lettuce saying that they were "monkey orchid" seeds they brought on Ebay.

i have an orchid with this seed pod. what do i do with it. or where do i put it