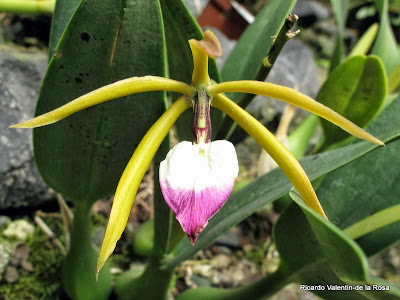 I saw this plant in the orchid house of the Botanical Garden of Quito, Ecuador.   Although this orchid was not identified with a tag, the flowers are unmistakable.   It was growing on a raised bed in the middle of the green house.  It had a single flower.    The plant was in excellent condition.   It is clear it thrives in a diurnal range of 45F during the night and 77F during the day.

This plant is found in Central America and Mexico at altitudes between 1200 and 2500 meters in wet pine oak evergreen forest, it is reported to sometimes grow on rocks.¹  This plant was placed by Withner in the genus Panarica.  In the Cattleyas and their relatives: The debatable Epidendrums, it is named Panarica brassavolae (Reichenbach f.) Withner & Harding. 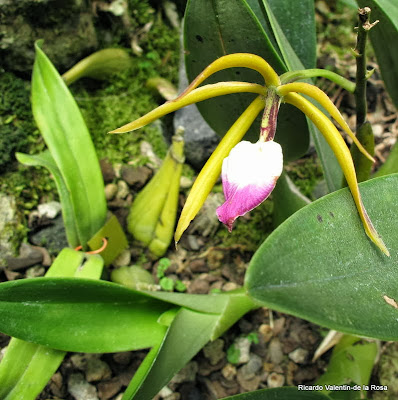 Hi I would love to grow this one here in Miami but I guess it would be too hot for it just like in Puerto Rico am I right Ricardo?

I think this species is probably poorly suited to places where the temperatures don't drop substancially at night. Given the absence of this species from shows in Puerto Rico, my guess is that it would not survive continual tropical conditions without some kind of artificial cooling at night.