Habenaria erichmichaelii Christenson 2003, An orchid that is pretty in pink. 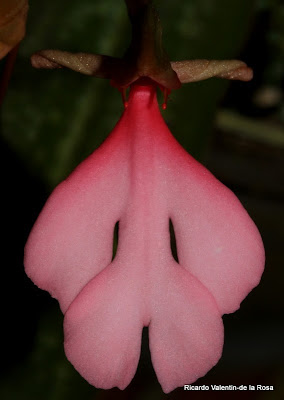 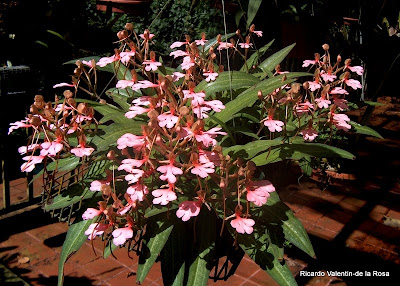 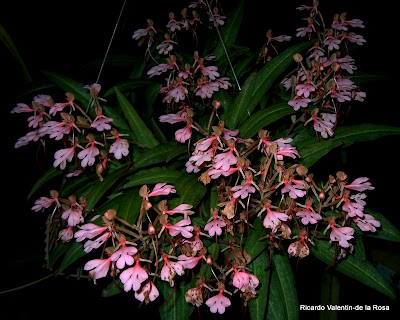 This orchid is similar to Habenaria rhodocheila. It differs from rhodocheila in that the color of its flowers is pink, the plant body has a smaller size and the leaves have silvery markings, it is native of Thailand.¹   I have had this plant for a decade now and I can attest that it is quite rewarding to grow.

There are a few things that you need to do to help this plant bloom to its best.  The first thing to know is that this plant loses its leaves after setting seed and becomes dormant, all that remains of the plant are the underground tubers. Because of this, for half the year, the pot where it grows looks empty.  I have known people that threw their plants away in disappointment when the saw the leaves die.

When the plant is dormant, I give it absolutely no care.  The only thing I do is weed the pot from time to time to keep the weeds and ferns from taking over.  My plants survive nicely even though the pot gets wet when it rains.  When the plant starts sprouting new leaves I start giving it plenty of water and fertilizer.  I even put a top dressing of manure over the soil in the pot to make sure the plants have plenty of nitrogen available.  These plants grow fast, if you fail to give them what they need to grow strongly you will end up with small and few flowered plants.
In my locality these plants start growing in May which is the start of the rainy season here, so watering is not an issue.  The plants grow fast and bloom between the end of August and the beginning of September.   After the plants blooms the leaves start looking awful and by December the plant has shed all its leaves.

It is important to protect the leaves from insects.  If the leaves are damaged the plant will bloom poorly and next year it might come back smaller, weaker and it might not bloom.  Although you can mostly ignore the pot for half the year, this is not a plant that thrives on neglect when it is growing.
I have seen a few plants of Habenaria rhodocheila in cultivation in Puerto Rico, but Hab. erichmichaelii seem to be less common locally.  Unfortunately its blooming season doesn’t coincide with any of the mayor orchid shows in Puerto Rico.  Given that it grows well in the local climate it’s a bit surprising that more people don’t grow this plant.