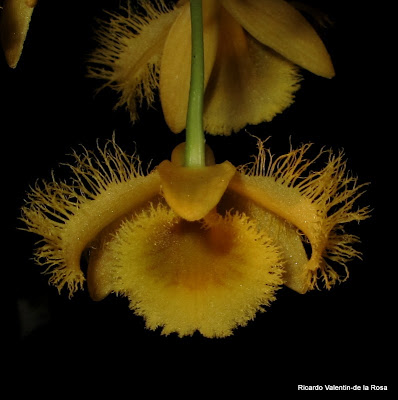 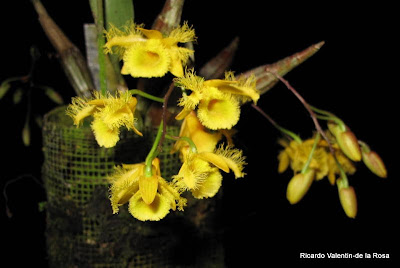 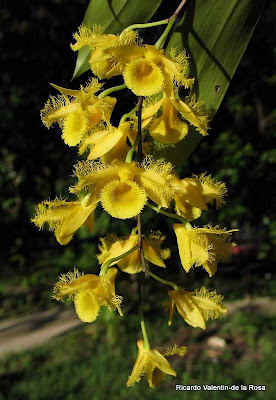 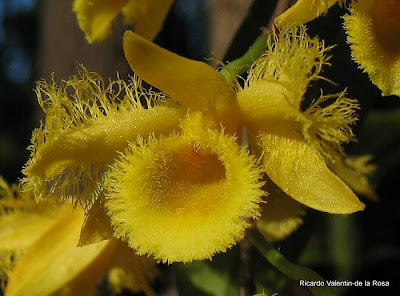 (I wrote an article about this species in 2011, here I revisit some of my old observations and add a few new ones)


This orchid comes from Burma, Thailand, Vietnam, and the Yunnan province in China.  In spite of its large area of distribution it is rare in the wild.¹   Since its discovery in 1883, this plant was always rare, and for a long time it was totally lost to cultivation.²   Plants of this species were discovered in northern Thailand and then reentered cultivation.²   Unfortunately, even after it was rediscovered, this plant remained generally unavailable for many years, one could only enjoy its beauty in the occasional photo in a book or an orchid magazine.

When I first saw the flowers this orchid in a book, I was immediately captivated by their unique characteristics.  That was in 1990, back then I could find no source of these orchids in the United States.  I know this sound quaint in the age of the Internet, but back then you had to peruse through orchid magazines, select those vendors that might have the orchid, write a letter asking for a checklist, and then wait for weeks or months to see if you would get an answer.

In 2006 I finally found a source and was able to buy three plants.  Unsure how they would adapt to the local conditions, I mounted one on a branch and potted the other two in wire baskets.  The plant in the branch did poorly and even thought it bloomed, it did so weakly and eventually died.  It died even after I had removed it from the branch and planted it in a basket like the other two plants.
The two plants in the baskets did well and two years later bloomed.  They have bloomed unfailingly every year, sometimes several times in the year, since that time.  The two plants have responded in slightly different ways to basket culture.  One of the plants has grown slowly and is still well within the confines of the basket, the other one was a vigorous grower and grew to the edges of the basket and has continued growing on its sides.  I have never repotted these plants as I suspect that damage to their root system would severely set them back.  As for their culture, I followed the advice to grow them like I grow my Dendrobium farmeri.³

As you can see, all plants responded in a different way to cultivation under my conditions.  One peculiarity is that the most vigorous plant produces keikis from time to time every time a cane loses its base to rot.  The other two never produced keikis.  These plants are unbothered by most pests in my area.  A single pest is capable of damaging them severely is snails.  When a new cane is growing snails have been known to attack the tender leaves.  This has resulted in the plants being set back and weakened.  The result was poor blooming in the cane that sustained the damage.  On rare occasions, canes that are growing have developed rot in the growing tip and died.  It is unclear what has caused this.

Considering how rare this plant has been in cultivation, it was a bit surprising that it has proven to grow well with little special treatment.  It can withstand the local dry season with ease, with no watering, even when a whole month goes without raining.   Outside of its growing season I give it no fertilizing.

The two plants produce inflorescences at any time between late April and July.  Different canes of the same plant can bloom all together or at different times in the same year.  My plants have produced inflorescences with as little as two flowers and as many as thirteen.  I thought the flowers were slightly fragrant until one occasion when I brought a plant in the house.  In late morning I found that the flowers had become powerfully fragrant, much more fragrant than I had ever noticed.   Next time this orchid blooms I shall see if this was a onetime event or whether it always happens but I had never noticed.  Flowers can vary slightly in color and size of the lip but I have not checked if this a characteristic that varies between the different plant or the different bloomings.

One thing I have noted is that my plants have remained relatively small, with canes that rarely grow over six inches tall.   I have seen photos in the Internet of plants that seem to have canes taller than seven inches, but this has not been my experience.  Only once has my plant produced a cane larger than seven inches, a cane that was produced in the 2013 growing season and that topped its growth at eight inches (20 centimeters).  The size of the mature canes of this plant has been cited as being between 6 and 9 inches (17 and 23 cm)¹ and five and eight (15 and 20 cm).³

Given the relatively small adult size of this plant, it often is overlooked when visitors come to my garden and are greeted by Grammatophyllum and Vandachnis that literally tower over all other plants.  But when they are in bloom, the unique, canary yellow flowers of this orchid are truly eye catching.   In my experience this is a plant that is well worth growing.
¹Baker, Margaret L. 1996. Orchid Species Culture.  Dendrobium.  Margaret L. Baker and Charles O. Baker.
²Menzies, David. 1991. Orchids.


³Schelpe, S., Steward, J.  1990 Dendrobium an introduction to the species in cultivation.
Posted by Ricardo at 8:13 PM